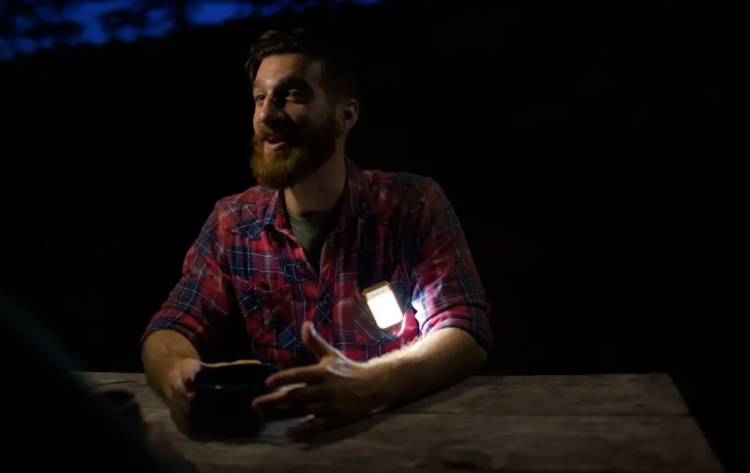 Calling all campers and/or preppers. We have identified some unique camp stoves and camp lighting gear you may want to add to your gear bag. All products are small, powerful, and functional.

It is imperative to begin your camping trip with the right camping gear. The camping market has an abundance of high-quality options with more appearing regularly. We selected these unique products for both campers and preppers. Let’s jump in and see if there is anything you to add to your gear bag.

1. LUME COMBINES A PORTABLE BURR GRINDER WITH A CAMP LIGHT

Every true coffee aficionado knows that burr grinders are practically a necessity when it comes to making good coffee. Cheap blade grinders simply don’t grind with the kind of precision and consistency that burr grinders do, and how finely they grind the coffee is determine solely by the length of time you let it run. A burr grinder, on the other hand, can be adjusted to get a precise, quality grind every time – the kind needed for perfect coffee drinks.

The problem was that, until know, there weren’t a lot of options for truly portable, automatic burr grinders – ones that you can take backpacking and camping without batting an eye. At least, not until Lume was put on Kickstarter last year, and it was a HUGE success. Now it is in production and ready to ship.

Lume looks like a single-serve blender, but is a battery-powered burr grinder, employing a newly-engineered stabilized conical ceramic burr to grind precise, smooth coffee. The battery is a rechargeable 3300mAh and will last up to 50 cups worth of coffee.

Furthermore, Lume is also a camp light, putting out 150 lumens worth of bright light for illuminating your tent or providing guidance around your campsite after dark. A single charge can provide up to 20 hours of light (if you don’t grind too much coffee, that is).  When the dawn comes, take it out and grind a fresh new cup of coffee to kickstart your morning.

It charges via USB and weighs a mere 22 ounces. A travel pouch for safekeeping is included in your pack or suitcase.

Outdoor, portable lighting usually takes two forms: flashlights and lanterns. But the Luminoodle adds another option – a five foot strip of LED lights that is portable and flexible, and sort of like Christmas lights but….much brighter. It is totally waterproof and dustproof, IPX6 rated. You can hang it from trees, wrap it around objects, or stuff it into the diffused storage bag that doubles as a lantern. There are sliding magnets, universal ties and a utility loop for hanging convenience, and when packed down it’s roughly the size of a softball.

It’s powered by a completely rechargeable 3400 MAH lithium battery, and puts out an impressive 180 lumens – that’s more than enough light for basic camp setups. There are over 15 different colors, 10 brightness settings and 3 strobe and fade modes for endless custom lighting combos.

While it’s not your typical lantern, by any means, the Luminoodle is a truly versatile piece of outdoor equipment, and should earn a spot in your pack for camping trips and adventures.

Biolite makes a ton of awesome outdoor gadgets, from stoves to solar panels. And if you’ve ever been frustrated with headlamps or ultra-bulky lanterns on your outdoor adventures, then their PowerLight Mini is the light you’re looking for to add to your camping gear.

The Powerlight Mini bears a striking resemblance to your everyday smartphone, is equally as slim and even smaller. It fits right into your pocket or the palm of your hand, and comes with a flipout kickstand for standing the light up on flat surfaces or tables and doubles as a pocket clip. The lamp itself puts out 135 lumens, and is powered by a rechargeable 1350 MAH Li-on battery that provides up to 52 hours of bright light. You can recharge it using a USB cable. There is also some water-resistance, rated to IPX4.

There are four modes:  White Lantern, Red Night Vision, Red/White Strobe and White Point Light. A bike mount is included, and Biolite bills it as a bike light, lantern and headlamp all rolled into one. For an ultra-portable, versatile and easy-to-use light that also looks cool – wherever you may be – Biolite has you covered.

Solar power used to be talk of hippies and environmentalists, but now it’s becoming a staple in many suburban and urban settings. People are hopping off the grid and supplying their own power for both environmental and financial reasons. It can also be put to use in a variety of different ways. See Biolite, for example, who already makes some pretty cool, handy camping gear. They’ve created an entire in-home system – the Biolite Solarhome 620 that attaches to a solar panel, allowing you to create the ultimate off-grid home from just about any structure.

Easy to install, the Biolite 620 comes with a 6-watt solar panel that captures the sun’s powerful rays and converts them to electricity. The system runs off a 20 watt-hour battery that can operate 3 hanging lights, a USB charge port, and a radio system. This can be placed in a central location in your house, camper, shack – what have you – and the lights hung throughout the entire place. The wall mounted control box allows you to monitor you power levels in real-time on the LED display. You can also charge your cellphones, MP3 players and other battery powered devices by hooking them up the battery. The wall mounted box can adjust the hanging lights to three levels of brightness as you prefer. A motion sensor light in also included, for added security outside of your home.

Currently the Biolite SolarHome 620 is on preorder until its release in February 2018.  This is a preorder for a product that will help you reduce your overall carbon footprint on the Earth; while it definitely won’t provide enough power to light up your home, it can turn any structure – a shed, barn, trailer – into a nice, off-the-grid home or shelter. BioLite continues to be a leader in affordable solar products.

Halfway between a fire pit and a backpacking stove, the Solo Stove is a modern, stainless-steel wood-burning stove. Small and light enough for backpacking and hiking, the Solo Lite weighs only 9 oz.

It is specially engineered to burn wood much more efficiently and with much less smoke than a straight-up, traditional campfire. It also takes much of the work out of lighting a fire – twigs and kindling can simply be stuffed inside and lite.

The air intakes on the bottom of the Solo Stove bring air into the bottom of the fire, almost like a bellows, while also allowing warm air to rise up the sides of the stove – which creates a secondary combustion and larger fire, and creates less smoke than a regular fire. It’s also more efficient, and will use less fuel than an open fire.

Fancy? For a fire – kind of. But the Solo Stove Lite is a perfect and convenient way to make a small cooking fire, and it fits right in bag (after cooling off, of course). It’s also great for campsites that have restrictions on open fires. This should be part of your prepper or camping gear.

6. BIOLITE CAMPSTOVE 2: A SMOKELESS STOVE THAT CHARGES YOUR DEVICES

Biolite makes some cool, innovative lights and camping equipment, and their original Campstove was an innovative way to convert your campfire into useful energy, charging your smartphone as the wood burns. The Biolite Campstove 2, however, is even better; like the original, it’s wood burning, but creates an entirely smokeless fire – thanks to Biolite’s patented technology, which burns away the smoke before it escapes – while converting the heat into electricity. You can then use this electricity to charge your devices via USB, or even power one of Biolite’s lanterns or their Flexlight while around the campfire.

The Campstove 2, however, features some upgrades over the previous generation, such as the new integrated 2600 MAH battery, to store more power and charge even faster than before, and the Smart LED Dashboard, which provides real time feedback on fire strength, power output and fan speed settings. The updated USB system is able to create 50% more power from the fire than the original Campstove, too. Internal fan jets help circulate air for improved burning, and you’ve got your choice of 4 fan speeds.

Lastly, if you’re looking for a real outdoor cooking experience, the CampStove 2 works with the BioLite KettlePot, Coffee Press and the Biolite Portable Grill, letting you cook all kinds of hot meals while camping in the backcountry. It’s also built with the same awesome nesting design, which lets you pack it down into the Kettlepot. It even weighs exactly the same as the previous model: 2 pounds. The Campstove 2 is a great upgrade to an already fantastic cooking stove, and the we’re excited to give it shot on our next trip.

Ready to take your cooking to the next level on your next camping trip? Jetboil makes a variety of high-quality, reliable camping stoves, but none really stack up with the Genesis Basecamp, a heavy-duty two-burner stove made for turning your campsite into a full-on kitchen.

No longer do you have to cook for an entire group with just a single camping stove. The Genesis Basecamp comes with a 10″ fry pan and a 5l Fluxpot, for cooking full, large meals for everybody – whether frying eggs, boiling water or heating up soup.The two burners, pan and pot all fold up into each other for packing in the included carrybag. The Frypan has a ceramic non-stick coating, while the Fuexpot has a Fluxring, which catches heat from the flame and concentrates it into the pot for much faster boiling.  There is a built-in lever lighter, and an attachable windscreen to keep the flame consistent in high winds.

The Genesis Basecamp may be a bit heavy for backpacking,  but if you’re an aspiring chef – or are just love a good hot meal after a day’s adventure –  it’s perfect for car-camping or short trips.

Is it time to do a gear check at your house? With all the new products arriving on the market, you may just find something you feel will make your outdoor experience more enjoyable. 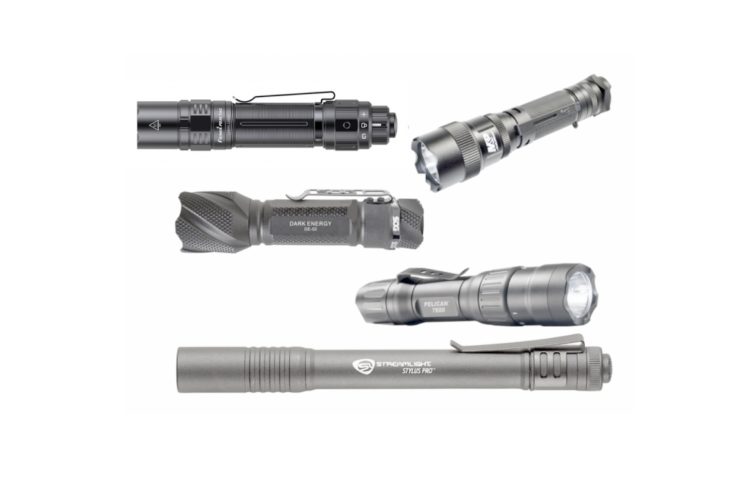 Best Tactical Flashlights That You Can Find in the Market!

Tactical flashlights aren't just for law enforcement and the military. Here are the top 8 high-quality flashlights for tactical situations.

2018 Nikola Zero Electric UTV: This Has Some SERIOUS Power

There. Is. Nothing. Like. This.  When you think of electric vehicles, you don't associate the vehicle with power and serious performance. However, the world of electric vehicles is quickly changing. This is evident with the 2018 Nikola Zero Electric UTV. Nikola has produced a UTV with spunk that is blowing the competitors away. The four-seater Nikola Zero is an all-electric, 400-volt plug-in, o-road and potentially street ready vehicle.

If you haven’t yet made the leap to a stainless-steel water bottle, you really ought to. You’ll be able to say goodbye to funky plastic smells and the possibility of chemicals leaching into your water, and your bottle will become much more attractive in the process.

5 Best Camping Chairs for 2020: Comfort in the Outdoors

SCARPA shoes are “born in the Dolomites,” and they provide some of the most cutting-edge hiking and mountaineering shoes combined with true Italian workmanship. If you’d like to equip your feet with the most comfortable climbing or running shoes in existence, here’s a couple new favorites.

Victorinox says that the SwissTool BS is about extremes. It’s a complete multitool all in one piece – a complete toolbox in one single piece