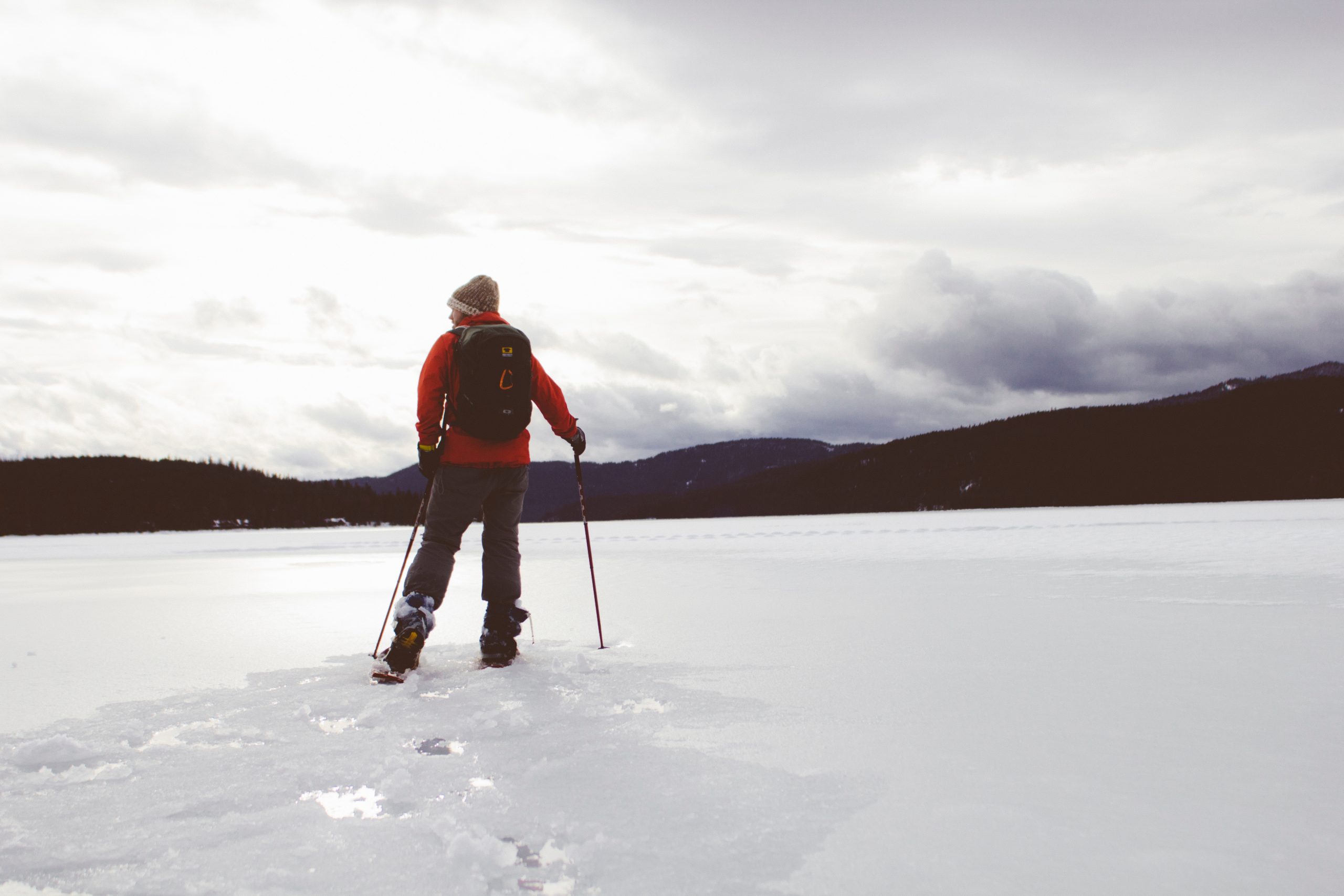 Snowshoes have existed in some form or another for thousands of years, all over the world, but Native Americas and Inuit invented the form of snowshoe we most recognize as a classic snowshoe today – wood frame with rawhide bindings. They were used heavily in hunting bison.

Instead of postholing in knee-deep snow, snowshoes will help you practically float  on top of the snow without any trouble. Long hikes are far less taxing, and you can make significantly better time with far less energy. 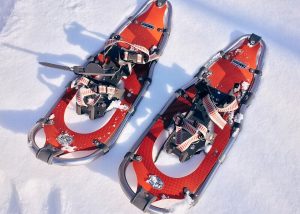 CHOOSING THE BEST SNOWSHOES FOR YOU

As with most other outdoor gear, snowshoes aren’t a one-size fits all – whether that’s one literal boot size or one purpose. There are few different kinds of snowshoes you’ll want to look at, depending on your planned use. 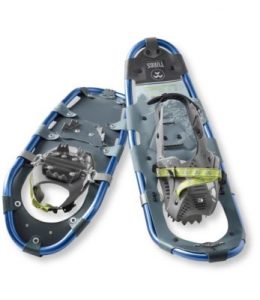 HIKING/RECREATIONAL SNOWSHOES: FOR GETTING OUTSIDE

Regular hiking snowshoes – also known as recreational snowshoes –  are the most common type of snowshoe, and the simplest. If you’re looking for your first pair, and don’t intend to use them for anything too rugged, these probably the kind you’ll want to look at. They are generally intended for mild and flat terrain, as well as rolling hills, but not climbing mountains or ultra-long treks.  This because of their usually quite simple bindings and traction don the bottom, which aren’t designed for heavy use. But this doesn’t mean they are of any lower quality or durability than other snowshoes. An example of hiking snowshoes are the MSR Evo 22’s, which have a nice modern fit and lots of grip, at an affordable price. 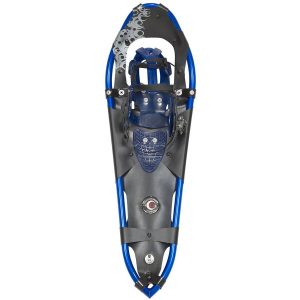 Now it’s time to tackle some tough terrain, and you want a pair of snowshoes to match. Backcountry snowshoes are more rugged and heavy-duty than regular hiking snowshoes, and will have more features, stronger builds, and heavier-duty traction and crampons. Accordingly, they will also have higher price tag. They’ll do far better on icy slopes and hills, and will fit larger, thicker boots much more comfortably. Our choice for these would probably bet the Crescent Moon Gold 10, which fit extra-large boots, have stainless steel crampons, and a slimmer, tear drop shape, which provide more mobility and flexibility, letting you move freely without smacking into each other too much. 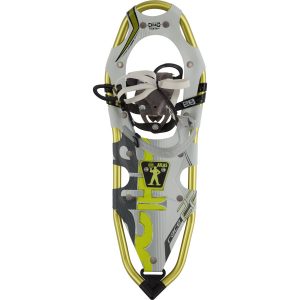 Racing snowshoes are made for those with a need for speed. Racing, or running, snowshoes are less concerned with flotation, and more so with lightweight, allowing you to run as quickly as possible over powdery, deep snow. You’ll be able to wear them over mild terrain, whether loose or packed snow. The shape will also be a little different; shorter, thinner and more tapered. This helps keep them from smashing into each other. A good of set racing snowshoes might be the Rocket Carbon from Crescent Moon.

Most snowshoes these days are made with aluminum frames, either flat, or of hollow tubing. Hollow tubing is usually better for softer, more powdery snow, while flat snowshoes are becoming more popular among mountaineers; the flat shape with sharp edges grip on icy and steep surfaces better.

You can also find lots of plastic/synthetic frame snowshoes these days, usually in a flatter, lighter shape. These work well for light, small setups, especially when you’re trying to cut down on weight, but don’t offer the same kind of grip, traction and features that larger, heavier-duty backcountry snowshoes will. There are some good options out there, however. 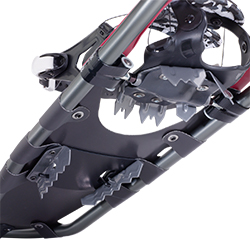 Snowshoes will almost always have some kind of traction on the bottom for gripping onto snow and onto , usually in the form of crampons, made from steel or aluminum. Most hiking or racing snowshoes will usually have a two-prong toe design, while many heavier-duty backcountry snowshoes feature middle prongs – a toe, so to speak – that sticks out and allows you to dig in to slopes and slick surfaces – much like regular crampons. Many snowshoes now have traction rails, on the side of the shoe, which provide more traction and stability on slopes.

Lots of snowshoes with plastic deckings have braking bars, which keep you from sliding backwards on hills, as well.

When choosing snowshoes, you will definitely want to take a look at the bindings, and make sure you select some that work well with your own boots. There are two common types of bindings –  Rotating Bindings, also called Floating Bindings; and Fixed Bindings.

Rotating bindings are thus called because they rotate on the snowshoe decking, letting your feet move a bit as you walk and allowing for a more natural movement, in deep snow and on slopes. These will be found on most modern snowshoes.

Fixed Bindings, on the other hand, are more traditional; they don’t pivot, instead keeping your feet secure and flat as you walk. This gives you more control over the shoe as opposed to rotating snowshoes but doesn’t work quite as well on slopes.

Bindings can be made of nylon, rubber/polyurethane, or ratchet straps, similar to those found on many snowboards. Rubber bindings will be the best, as they do not freeze when they get wet and cold, and for that reason they are the most common.

You can even find some newer models with boa straps, a relatively new style of binding commonly found on snowboards, that wrap around your heel; by pulling  on the adjustment strap, you can easily pop the heel open, and simply slide your feet in and out.  A few new snowshoe models even come with heel lifts, which fold up and support your heals while climbing up steeper terrain.

We bet if you look around, you can find some old-fashioned snowshoes with leather bindings, too.

TIP: Be sure to find a snowshoe with bindings that fit your own particular boots. As boots can be pretty heavy and thick, this may be a bit hard if you already have large feet. If you’re having trouble, backcountry snowshoes are more likely to fit you, as they are often designed for larger, heavier-duty boots.

OUR PICKS FOR BEST SNOWSHOES 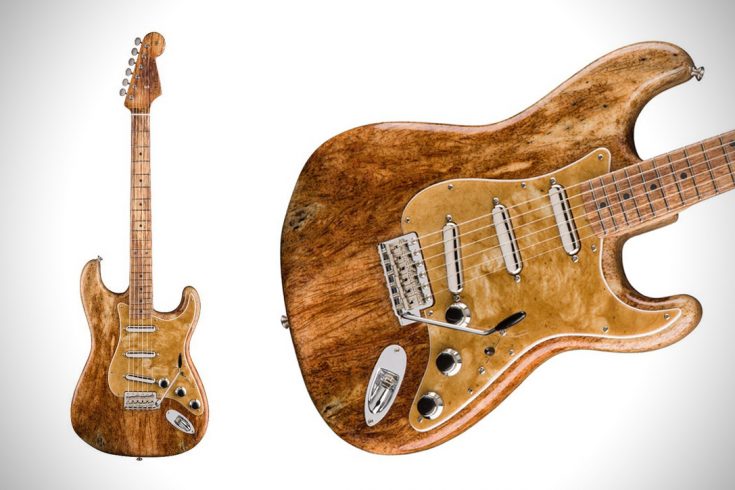 X Cuervo Fender Stratocaster Guitar: Made Out of an Agave Plant?

This is taking creativity beyond extreme! Imagine a Fender Guitar made from an agave plant. Cuervo has partnered with Fender® – one of the world’s most legendary and innovative instrument brands – to create the world’s first Agave Stratocaster®. Working with the extremely soft agave plant material presented Waller with a unique challenge.

Halfway between a fire pit and a backpacking stove, the Solo Stove is a modern, stainless-steel wood-burning stove. Small and light enough for backpacking and hiking, the Solo Lite weighs only 9 oz. It is specially engineered to burn wood much more efficiently and with much less smoke than a straight-up, traditional campfire. It also takes much of the work out of lighting a fire – twigs and kindling can simply be stuffed inside and lite. The air intakes on the bottom of the Solo Stove bring air into the bottom of the fire, almost like a bellows, while also allowing warm air to rise up the sides of the stove – which creates a secondary combustion and larger fire, and creates less smoke than a regular fire. It’s also more efficient, and will use less fuel than an open fire.

You're probably thinking these are perfect for those who want to “rough it up” out there. Even though that is one application, these cut-resistant Kevlar sleeves actually have many practical applications. For example: Applications Mechanics Welders Motorcyclists Pet Groomers Cat or Dog Owners Glass Handlers

We live in an age of hybrid products or products created through collaborations. The Chuck is just that. Fern and Gramm Tourpacking have teamed to built the most practical, functional touring bike on the market. At first glance, you may question what the creators had in mind. A closer look at the wheels may explain that.

1620 Workwear Is The Last Workwear You’ll Ever Need

1620 Workwear is inspired by the heritage and spirit of workers and craftsmanship that the country was built on. Their name is an homage to the year the Pilgrims landed at Plymouth Rock, and all their clothing is made in America; and when they say Made in America, they mean "with American made fabric, buttons and zippers sewn together by American machinists". The result is that every single piece of workwear they make is of utmost quality and built to last a lifetime.