These Are The Best Foldable Phones of 2019 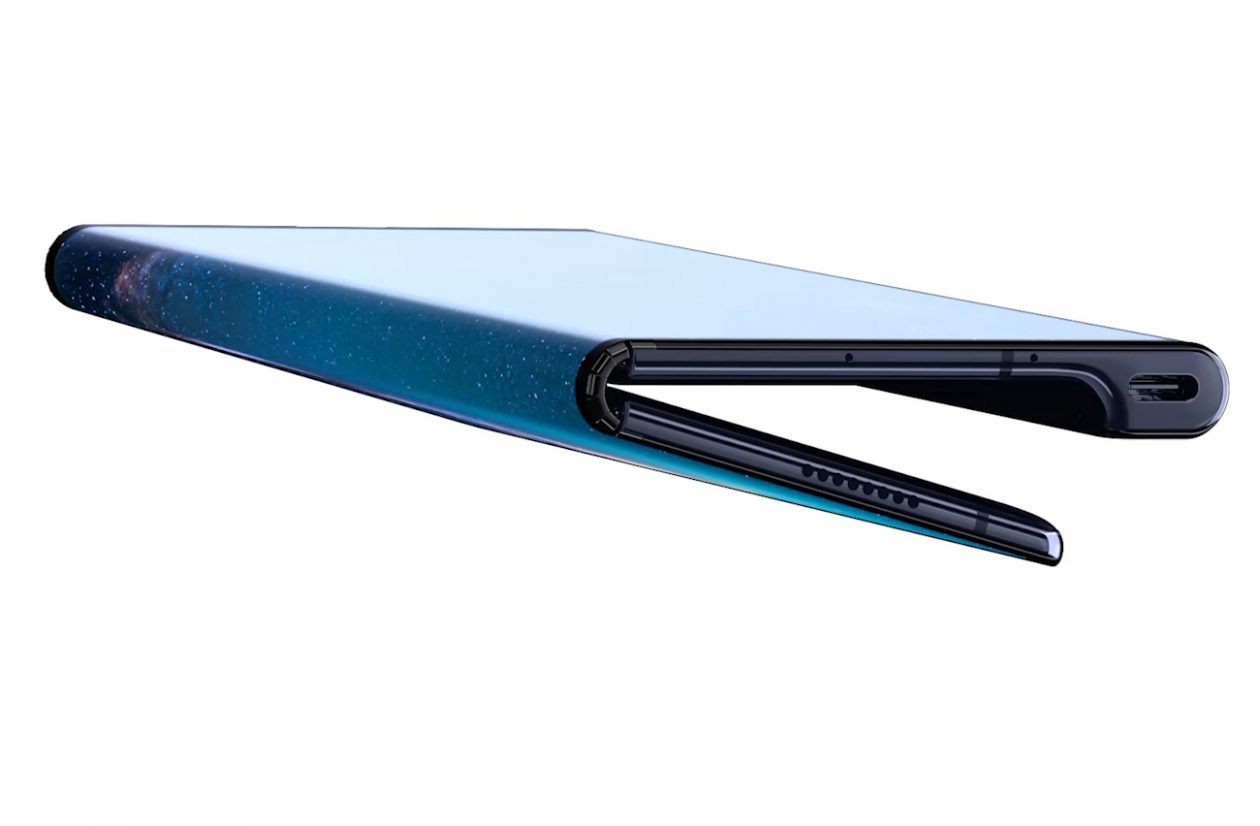 2019 is shaping up to be the Year of the Foldable Phone – and when we say foldable, we  don’t mean like your old flip phone. If you were among the many who – as rumors swirled –  that folding phones were just gimmicks, we totally get it. The larger phones get, the less we like them. But now’s the time to think again. They’re coming, and they’re gonna be hot.

With the reveals of the Galaxy Fold and the Huawei Mate X, it’s evident that folding phones are going to establish themselves quickly. Maybe they’re just the cell phone’s inevitable progression; it’s already progressed from a tiny, cheap plastic flip phone to something with built-in facial recognition  – in under a decade. Maybe folding phones were just bound to be next.

Whatever inspired the trend, they’re real – and the first offering aren’t bad at all. So far, they all run Android-so no need to choose OS. (No word on when Apple might try and get in the game). Here’s all the foldable phones on the market right now (all Android models) and what we think of each. 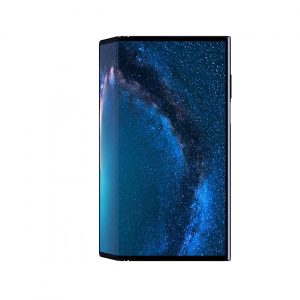 Recently announced at Mobile World Congress 2019, the Mate X is Huawei’s attempt to capitalize on the folding phone craze and further establish themselves in the US market. This bad boy does double duty as both an 8” tablet and an a dual-screen phone; fold it in half, and that 8″ screen turns into a 6.6″ primary OLED screen on front and 6.38-inch screen on the back. The screen is totally smooth and one-piece, with no creases or seams for folding, creating an attractive and easy-to-use piece of hardware.

Hardware and software are top-of-the-line, too: it runs off a Kirin 980 chipset and boasts 5G wireless courtesy of a Balong modem. The 4500 mAH battery is also equipped for 55W charging, promising to give that battery an 80%-full charge in under 30 minutes. There are no cameras on the front (those included will likely be Leica) or facial recognition – keeping things simple.

Our Take: We love the seamless folding screen design and look forward to seeing how the Leica cameras perform. We certainly won’t miss the facial recognition, either – fancy gimmicks just aren’t our thing. Simplicity and ease-of-use is.  Also, being able to call the device in your pocked the “world’s first foldable 5G phone” is cool. 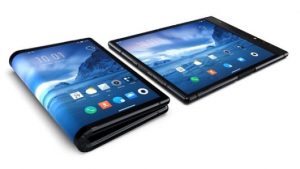 Remember this guy? It truly was the World’s First Foldable Phone, beating everyone else to the punch and staking out its claim to the title. Right now, you can only get it in China, but from what we’ve seen, it might be a decent offering; it rocks a Snapdragon octa-core chipset with 6 or 8GB RAM, and the 7.8-inch flexible AMOLED tablet screen (with 1440 pixel resolution) can easily and quickly fold in half for sticking in your pocket or using as a two-side smartphone.

The FlexPai comes with fingerprint scanner for unlocking and is compatible with dual SIM cards. It charges via ever-more-popular USB Type-C port. Finishing off the package are a 16-megapixiel wide-angle camera and a 20MP telephoto lens, which pair up as front and rear cameras when the phone is folded in half.

Problems? There’s no headphone jack, implying that Royole was inspired by Apple. And, it’s bulky when folded in half.  Not something that’s going to slip into your tight jeans pocket. We do like the magnets that keep it snapped together.

Our Take: It’s only out in China right now, so maybe this one doesn’t matter – but it is the original folding phone and it deserves a mention. We like the Royole’s boldness and creativity in creating the first of the foldable phones, and look forward to trying one out if/when they make their way overseas. 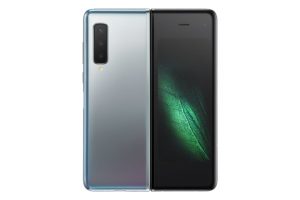 Rumors regarding the Galaxy Fold have been swirling for a couple years now, but Samsung has finally confirmed them (and put others to bed) this past month – unveiling the Fold at Unpacked 2019. If you can afford the whopping $1980 price tag – it might just be the best folding phone in the pack.

When folded, the Fold rocks a 4.6” AMOLED smartphone screen (dubbed the Infinity Flex). When unfolded, it’s a 7.3” tablet. Unlike the Royole FlexPai, however, the design is slim and sleek and the hinge subtle, blending covertly into the phone’s design instead of sticking out and disturbing the physique.  You might say it looks like a classic Samsung phone with a twist.

Inside doesn’t disappoint, either. The Fold rocks a 7nm 64-bit octa-core processor with 12GB RAM for blazing fast performance. Storage is massive, too – with 512GB of UFS3.0. It’s powered by a 4380mAh battery that is actually divided in two pieces – one side for each side of the phone. It’s fast-chargeable, using both wired and wireless options.

Our Take: We won’t actually know what the best of all the foldable phones coming out this year actually is until we try them all out, but our money is on the Galaxy Fold. 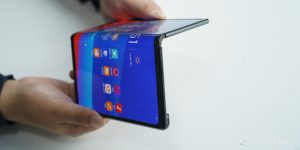 Oppo’s folding phone is just a prototype/concept right now, but considering how quickly everybody else is trying to get in the game we’d expect them to be moving forward with it right quick. There aren’t many details available, but it looks like it’s going to have a foldable OLED screen similar to the one on the Royole and boast a couple of decent cameras. Actually, it looks suspiciously like the FlexPai to our eyes -though it likely has its own tricks and unique attractions.

Our Take: We’d peg this prototype more in the tablet-phone-hybrid camp than the true folding phone category. Still, it could be nice – whenever it comes out. 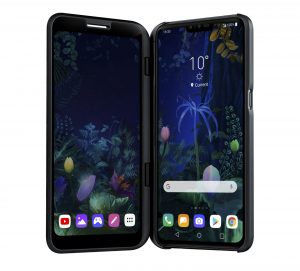 LG wanted to get in on the 5G Folding Phone game, too – but didn’t want to go all in. So, they created a phone that has two detachable screens that clip together – the V50 ThingQ 5G, also unveiled at the Mobile World Congress. LG is calling this detachable screen thing the Dual Screen, and it’s really more like a phone case with its own screen built-in – but the closest thing they’re offering to a foldable screen at the moment. It’s a 6.2” OLED and can rotate a full 360-degrees, too.

Specwise, the ThinQ 5G doesn’t disappoint. First, it’s got 5G – as the name implies. Expect sweet data speeds complementing the fast processing speeds that the Snapdragon 855 and 6gb of RAM will produce. 128GB storage is ample. LG also decided to go the overkill route with the cameras too –  just like Samsung. The rear rocks a 12MP F1.5, a 16MP wide-angle F1.9, and a 12MP zoom, F2.4, while the front has an 8MP F1.9 and a 5MP wide F/2.2.

Our Take: It’s not nearly as fancy as the true foldable phones other brands are dropping but offers standard LG smartphone plus some new upgrades. Could be good. 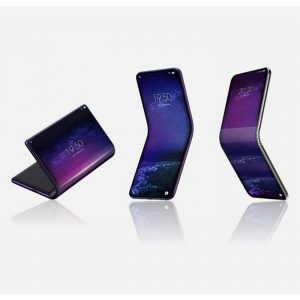 Yet another offering unveiled at the Mobile World Congress, TCL’s folding phone is – like Oppo’s – just in prototype stages. We have no idea when it might the market or what might be included in and with it. The 7.2” display promises to be an OLED with a 2048 x 1546 resolution. Considering TCL’s main business is displays, we expect it will be a pretty good one, too.  This phone marks the debut of TCl’s DragonHinge frame – a smooth, subtle and effective design that we could see other brands looking to for inspiration in the future. The cover may also have a small display for notifications and texts. But that’s all we know right now.

A Table Clock Which Shoots for the Moon