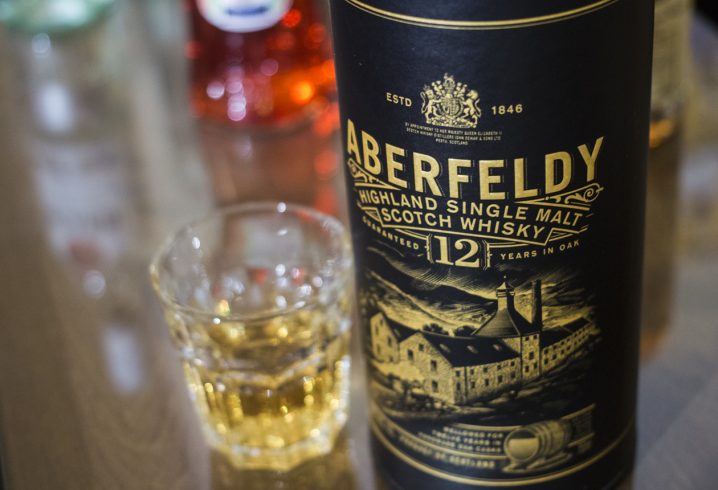 These Are The Best Cheap Whiskeys To Drink in 2019

Cheap doesn’t have to mean bad. If you’ve been following us for a while, you probably already picked up on that. It’s true for whiskey as it is for cigars or bivy sacks. Enjoying a really good whisky doesn’t mean dropping a $50+ a bottle. In fact, you don’t even need to spend $20 or $30 a bottle. There’s a selection of great whiskeys out there for a lot less, that don’t taste like you’ve just poured yourself a dram of paint thinner on the rocks. (You know – the way a $7 bottle of whiskey does).

Here are some of the cheap whiskeys we’re thinking of getting for the home bar this year – based on both our personal experience and word on the street. 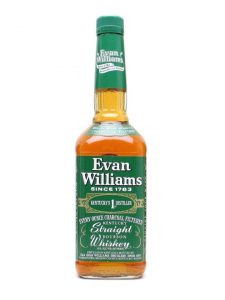 Aged for a minimum of 4 years and clocking in at a classic 80 proof, this is a classic bourbon for not a lot of money. You can likely grab a bottle of this for less than $10; we’ve even seen it at the corner store for $8 a piece. At that point, any flaws it does have aren’t worth complaining about.  You’ll get some notes of vanilla, oak, and honey, and a pale golden color.

Is it anything earth-shattering? Nope, but it is an affordable staple to keep on the shelf for mixing cocktails and experiment with new drinks when you don’t to play with the good stuff. Like we said, when you can grab a bottle for $8 bucks, who cares?

Though it’s not quite as cheap as Evan’s Green Label, we hear Evan Williams Bottled in Bond is really good – and not just for bargain basement price. It’s made from a mash bill of 78% corn, 10% rye and 12% malt, aged in a bonded warehouse for 4 years, and then bottled at 100 proof – making it a true BIB bourbon and a strong drink both in mixed drinks and alone; many bars keep a few bottles of it around for mixing. You can grab one for well under $20. 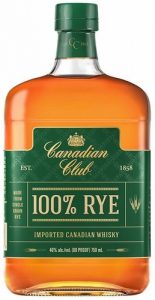 Canadian Club is another liquor cabinet staple. Hiram Walker distilled the first bottle of Canadian Club in 1854 and they ran a profitable bootlegging operating during the Prohibition, smuggling Canadian club across the Detroit River in classic rumrunning style. Beam Suntory has since picked them up and added them to their portfolio a few years back, but the liquor and Canadian spirt has stayed the same. We find their rye whiskey is usually overlooked in favor of their regular whisky, but we honestly think its even better; smooth, sweet, oaky, some vanilla. If you’re going to drink any Canadian Club straight, make it this one. 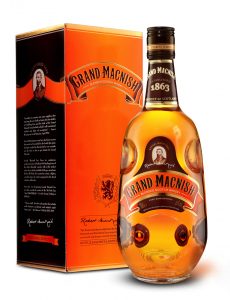 Grabbing a 12-year old Scotch for under $20 is a pretty good deal. As it turns, this blended 12-year edition of the original Grand Macnish is actually they’re best – even with many of their other whiskys costing a bit more. It’s a dual-cask, mature in sherry and bourbon casks, and picks up some great notes of toast and vanilla, maybe even some fruit. So it’s a bit run-of-the-mill, but one of the better aged whiskey blends you’re gonna pick up for less than a Jackson. Honestly, if you want a cheap Scotch to sip on – this might be it.

Another off-the-beaten-path Scotch you’ve likely never heard of, Old Smuggler was first bottled back in 1835, named after the many Scotch smugglers who conducted business around the innumerable Scottish isles; the likeness of a smuggler on the bottle reminds of that past, as does the “Scotch With A History” emblazed around it. It’s a little bit pale and is usually a blend of single malt and single grain from a variety of unnamed distilleries, aged for an unspecified amount of time; as it’s Scotch, that unspecified amount of time has to be at least 3 years. For $7 a bottle, it’s one of the cheapest of cheap whiskeys and good choice for experimenting with mixers and serving up at large parties. 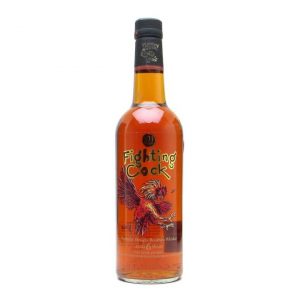 For those who love Bourbon and just can’t imagine settling for a bottle of Evan Williams, there’s always Fighting Cock Bourbon, which seems to satisfy even the pickiest of bourbon lovers. At 103 proof, it’s a good deal stiffer than most bourbons – which could possibly be where it picked up its unique name. But this is a classic bourbon in every sense of the word, and a smooth one to boot. It’s aged for 6 years in charred oak barrels (like a real bourbon, of course) and goes down smooth, despite the heavy ABV. The perfect drink for when you feel like getting a bit rowdy (responsibly rowdy, of course). 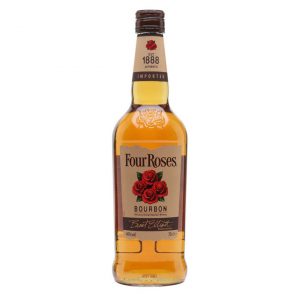 Probably the best straight-up budget bourbon, Four Roses is a real pleasure to sip. We will admit to having had a few bottles in the past without even realizing it wasn’t more top-shelf stuff. It really is that good, with a beautiful golden color, hints of oak and vanilla, of course, those flowery aromas and hints of roses on the nose. Smooth and soft, bottled at a classic 80 proof.

To be honest, we don’t think it gets much better than Four Roses. There’s just something so pleasing an relaxing about that sweet gentle honey and fruity, floral taste, and long, smooth finish. We could sip it all day – and just realized that we really need to replenish the home bar with another bottle.

These aren’t cheap whiskeys, exactly. But we recently discovered them and loved them, and thought they deserved an honorable mention for standing out amongst the pack of $30 bottles. If anything, at least they aren’t straight up expensive. 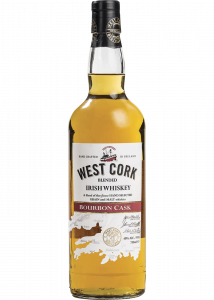 From West Cork comes this unique blend of 75% grain Irish whisky and 25% malt Irish whiskey, distilled with water from the Illen River. It’s been aged in bourbon casks for longer than most of their regular whiskys (though they don’t say exactly how long), resulting in a spirit that presents the perfect combo of dry grain and sweetness. The palate offers hints of citrus, sweet apple and honey, and caramel, as well as the customary bourbon hints of oak, vanilla and malt, if you look close enough – while still classically Irish. It’s a smooth drink that we’re surprised goes for less than $30.

West Cork Distillery It was started in 2003 by three childhood friends who reunited to create their own whiskys, and they even had to build several of their own pot stills themselves – by hand. They’re still using them today. Sounds like some real stuff with the Irish spirit to match.

Again, this isn’t a “cheap” bourbon per se, but it is real good stuff. Double-distilled in Oklahoma by a group of 7 combat veterans, Leadslingers Bourbon is a hearty drink for those who straight-up love American and American Whiskey. The idea was to make a whiskey that celebrated the American spirit and the 2nd Amendment and was as bold as the original frontiersmen and today’s veterans alike. We think they succeeded.

How does it taste? Like damn good American bourbon. It’s been double-distilled and crafted with a single-barrel process that gives a smooth, pleasant bourbon flavor without overpowering, and all the customary notes of oak, toffee, and vanilla. A bourbon sure to please the most patriotic of whiskey lovers, even if they do have to shell out more than a $20 bill. 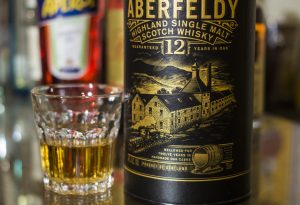 Aberfeldy 12 Year is the most expensive whiskey on this “cheap list,” but we managed to snag one of these on sale recently – and decided it deserved its own spot on the list. It’s a classic single malt, with a bit of sweetness and little bits of fruity notes – but just enough smokiness to remind you that yes, you are sipping a Scotch. Feel free to splurge – you have our permission. 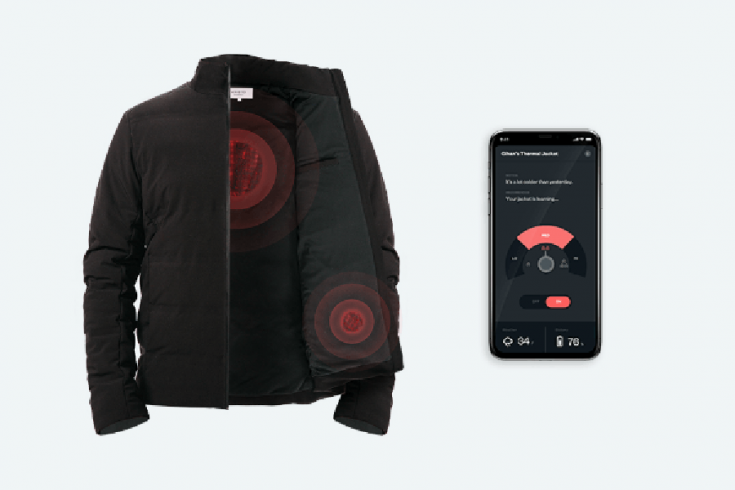 The first Intelligent Heated Jacket. What exactly does that mean? The Mercury Intelligent Heated Jacket from Ministry of Supply contains a heating system that can actually be voice-controlled. Yes, voice-controlled. Before heading out into the cold, simply tell Alexa (or whatever voice assistant you have) that you’d like to warm up your jacket before heading outside, and the jacket’s built-in heaters will get to work.

One of the first things all outdoor enthusiasts learn, is the importance – and power of – a proper baselayer. Regulating body temperature and allowing moisture (read: sweat) to wick outside your clothes and evaporate will make all the difference not only in keeping you comfortable, but also keeping you warm and safe in cold weather.

A flask of whiskey or a few canned beers are absolute essentials when you're heading into the outdoors. But if you ever find yourself craving a good old mixed drink - say Gin & Tonic, or even a Bloody Mary - while outside, but don't want to lug around all the necessary ingredients, Cutwater Spirits has you covered with their new Canned Cocktails.

It's all about cool, practical gear in the most compact size possible. BucknBear and Huckberry teamed up to produce just that in the Folding Coin Knife. The modern Damascus steel is world class and is sure to catch everyone's eye when you pull it out. The wave pattern is purely exquisite. How small is this small? A little larger than a quarter. It's so small, it will fit into the coin pocket of your jeans. You may be hesitant of it's size; however, it is ready to tack any everyday job. Specifications Part of the Huckberry-exclusive Damascus EDC collection Made from modern Damascus steel with a unique pattern on every tool Features a G10 handle and Damascus steel blade

Like Cameras? You Need The Peak Design Capture Clip

Carrying a camera on a strap can be somewhat awkward and uncomfortable on the trails if it’s swinging around and knocking into things. Sticking your camera in your pack, however, makes it hard to access when you need it – meaning you’ll miss great shots and those perfect moments.

When you’re climbing alpine peaks and hauling a bunch of cold weather gear, you want a tent that weighs as little as possible – but still manages to stand up the absolute onslaught that alpine conditions tend to throw your way. Enter the MSR Advance Pro 2.