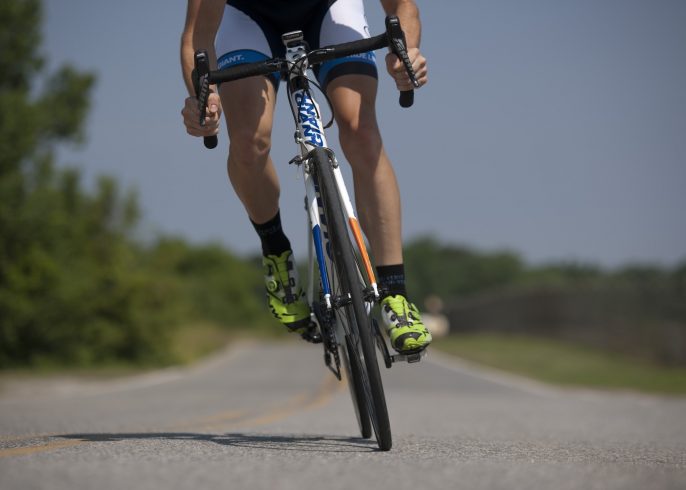 Make Your Next Buy One of These Stunning Italian Road Bikes

If there is one thing Italians know about (other than arguably the world’s best food), it’s creating beautiful, elegant pieces designs. Ferrari, Lamborghini, Armani – all as elegant as can be. Combine that passion for design with their passion for cycling and all things fast, and Italy produces some of the finest bicycles in existence. That’s no secret, of course, and we’re sure that many a cycling fanatic has spent afternoons lusting over gorgeous Italian road bikes that is just a little bit too far out of their budget.

If there is one thing Italians know about (other than making arguably the world’s best food, and definitely their best wine), it’s creating beautiful, elegant pieces designs. Ferrari, Lamborghini, Armani – all as elegant as can be. Combine that passion for design with their passion for cycling and all things fast, and Italy produces some of the finest bicycles in existence. That’s no secret, of course, and we’re sure that many a cycling fanatic has spent afternoons lusting over gorgeous Italian road bikes that is just a little bit too far out of their budget. And when you do own an Italian road bike, it becomes a matter of pride and a piece to show off to all your friends – cyclists or not. Because well, your bike is Italian, so it must be good.  In fact, you might say that Italian is the brand itself.

So, to celebrate the perfect marriage of Italian design and speed, we’re taking a look at some of the most beautiful, exotic, and fast Italian road bikes out there. Some are pricey, some middle-of-the-road, and one or two might actually be within your budget. So there’s bound to be one or two that catches your eye, the rest promise to at least be eye-candy for those of us who can’t afford one right now.

With an entirely carbon frameset and even a carbon derailleur, the Oltre XR4 is one beautifully fast (and straight up beautiful) racing bike for those with a need for speed. It rides as smooth as it looks, and is just as comfortable to sit on too,  as it uses Bianchi Countervail –  Bianchi’s new “Integrated Vibration Cancelling System”  with a “viscoelastic carbon material with a unique fiber architecture” as Bianchi puts it,  dampening vibrations and allowing for smoother, more aerodynamic handling at breakneck speeds, and even reduce muscle fatigue, according to Bianchi. The frameset only weighs a mere 980 grams as well – breathtakingly ultralight. And Bianchi has been around since 1885, making them the veritable grandfathers of Italian bikes- if not bikes in general. 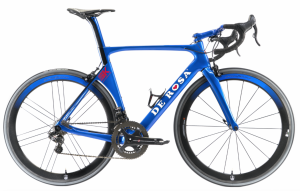 De Rosa is known for making top-of-the-line, reliable bike frames, and the SK Pininfarina is no exception. A collaboration with the well-known Italian car designers Pininfarina, the SK Pininfarina is an updated version of the De Rosa Super King Road bike – the brand’s most popular bike model, designed to be truly aerodynamic and achieve some wicked speeds on the road. With a carbon frame and electronic shifting, the price tag and performance are almost too good to be true. And it has Campagnolo’s Super Record Groupset, in addition to that retro-yet-strangley-modern paint job.  Fast and distinctly Italian.

Every cyclist is at least familiar with the name Pinarello; they’re easily one of the most well-known Italian bikemakers and have been around since 1952. While they started making steel frames back in the day, they have become known over the decades for innovating and coming up with new frame designs and materials, getting a handle on them long before many other brands did – an example being the luxurious, beyond-beautiful Dogma F10. The frame is Toray T1100 1K Dream carbon fibre, Pinarello’s NanoFlex impact-diffusion technology, built on the same aerodynamic build as the legendary Dogma F8. And the fork has lifted from the Bolide Time Trial, with its concave-shaped downtube – which is supposed to reduce drag by 12.8% over a regular downtube.

The Dogma F10, like its predecessor the F8, is also known for its bold styling, seeing how large that downtube is. You might say graceful boldness is the name of the game when it comes to Italian road bikes.

The one thing the Pinarello isn’t, is inexpensive. But really, is that what you were expecting on this list?

Wilier has been crafting elegant road bikes in Vicenzo – in Northern Italy – since 1906. The name originally comes from an acronym for “W l’Italia liberata e redenta!”, which translates as “Long Live Italy, liberated and redeemed,” as at the time, not all of Italy was united into one country.

History lessons aside, the Zero 7 is Wilier’s lightest bike frame ever, boasting a barely-there weight of 799 grams. That is ultra-light. The frame is also ultra-stiff – meant for climbing big hills, a task where plenty of speed and power need to be paired with low weight to really get moving; all together, the bike only weighs 14 pounds, minus the wheels. Wilier may have compromised some of the more aerodynamic elements on this bike to achieve maximum stiffness, but in terms of stiffness, they really succeeded: there is practically no flex anywhere, even up front by the bars. The Zero 7 will also accommodate an electronic groupset.

Not the smoothest ride ever, but it is stiff and light. And gorgeous. That red, white and blue paint job might be worth it on its own. It can also be found for under $2k.

A superbike from one another of the most legendary names in cycling – Colnago – who has been equipping elite cyclists and world champions for over 60 years now. The C60 was first released in 2014 to commemorate the brand’s 60th anniversary, and features a handmade carbon fiber frame and comes with Colnago’s customary star-shaped lugs and tubes, which increase the tube’s total volume while cutting down on thickness and simultaneously increasing stiffness. Colgnao also redesigned the rear dropouts, dropping weight while increasing their “lateral stiffness.”

Light and super stiff, the C60 frame clocks in at about 1050 grams. Pair that with the 25mm Hutchinson Fusion tires, and it’s a race-ready superbike for the most serious of cyclists, and rocks that stunning racing paintjob. It actually doesn’t get much better looking than that.

If you’d like to actually be able to, you know, afford an Italian road bike without selling your car or skipping the groceries for the month, you could try the Via Nirone Sora; with an MSRP of about $950, it’s a road bike for those of us on lesser-but-not-quite-ramen-noodle budgets. Named after Eduardo Bianchi’s original address in 1885, when he first started producing bikes in Milan, this bike was built for endurance racing and emphasizes comfort for all-day bike rides. The frame is a triple-butted, hydroformed aluminum, paired with a carbon fork with a K-VID vibration dampening technology and a specially designed Bianchi seat for a comfortable seating position. Bianchi also wants you to know this is a real road bike designed to be comfortable, and not the other way around – a comfy bike designed to handle the road decently. Again, this is one you could actually save up for.

Looking for something just a little bit more versatility? This Mercury Carbon Hybrid frame from Pinarello is paired with disc brakes, and makes city riding and commuting easy, while remaining light enough for serious road biking and even road racing. In addition to the 24HMUD carbon frame, it boasts room for 28mm tires in case you’d like to put something bigger on it and do some light offroad riding (not mountain biking per se, but the frame can handle some rough terrain and a few bumps).  Pinarello wants it to be your everyday bike, so they designed it to be easily upgradable, with Shimano Sora parts, a Think2 cable housing that can be customized to be either electric, hydraulic or mechanical, and an asymmetrical frame for increased pedal efficiency.

And at under $2k, it’s a bike you could easily save up for and ride every day, everywhere. To work. The bike trail. Or for all-day marathons. 18 pounds all-in. 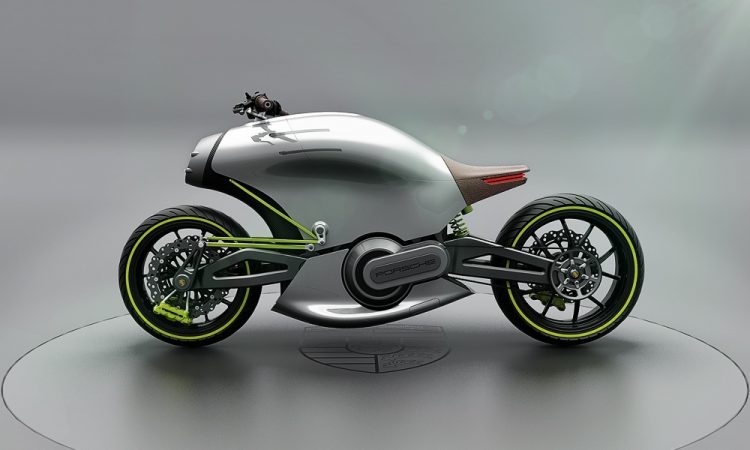 The All-Electric Porsche Motorcycle–In Your Dreams

This is what dreams are made of. The all-electric Porsche Motorcycle is just a concept but that won't keep us from dreaming of this baby on the road. These futuristic motorcycles are teasers that we hope to see go to production at some point. At some point, they’re going to have to start releasing these futuristic motorcycle concepts, because we’re not sure how many more we can take without actually getting to ride one. Miguel Angel Bahri has recently unveiled the Porsche 618, an electric motorcycle concept that looks like a 911 Turbo you sit on top of rather and inside.

The Best Icelantic Skis For Winter 2019

What’s so cool about Icelantic Skis? Pretty much everything, including the unique paintjob on every model.

Still looking for something to get Dad for Father's Day? If you think his decades-old wallet might need replacing, grab the Hide and Seek from Bellroy - a traditional bi-fold with a slim, low profile. Bellroy made the Hide and Seek with premium, vegetable-tanned leather, and gives it a 3-year warranty to cover anything that might happen to it (during normal everyday wear and tea

The Vollebak Solar Charged Jacket Actually Glows In The Dark

Vollebak is known for creating a lot of hi-tech apparel - they call themselves "the future of outdoor gear" - items that you could never have imagined or thought up yourself, but are still versatile and extremely functional pieces nonetheless. They've followed these up with perhaps their most interesting piece yet - a Solar Charged Jacket.

Coffee Break: The 5 Best Espresso Machines For Your Kitchen

We love espresso. There’s just no getting around that, and we find it just knocks regular coffee out of the water. And we love regular coffee. There’s just nothing like the aroma of a finely pulled shot, whether straight up on its own or poured with perfectly steamed milk – a meticulous crema on top.

They’ve been popping up on the scene over the past few years but are still few and far between. We’re guessing a lot of guitar purists won’t give the time of day to anything not made from wood, but we think carbon fiber guitars are worth checking out, especially ones from Klos.