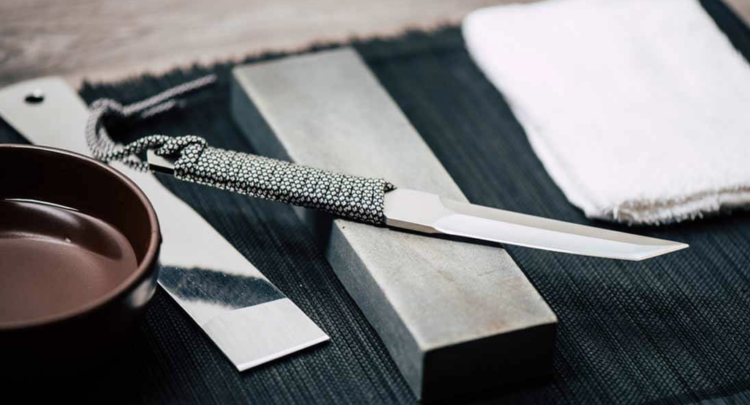 KNIFE SHARPENING PERFECTION: How To Sharpen A Tanto Blade

No matter which type of knife you own, they can all go blunt eventually, and there is probably nothing more frustrating than a dull knife.

There is an art to knife sharpening. We are here to give you guidance on perfecting the art. To make your knife razor-sharp again, you will need to know how to sharpen a knife. Knife sharpening requires specific techniques and knowledge of the different blade types available on the market.

This guide will walk you through sharpening your tanto knife at a proper angle and with the correct sharpening tools.

What is a Tanto Knife?

Originally a tanto knife was a Japanese short sword worn by the samurai, and it was used as a stabbing device and for mixed martial arts, but thanks to its razor-fine cutting edge, it was also used to slash cut.

There are various forms and names for different tanto blades, and their blade shape differs depending on the main function. Traditionally, tanto blades are between 7.8 and 11.8 inches long.

A tanto knife, also called an American tanto, is considered a tactical knife for outdoor use, adventures, or self-defense (in terms of slashing and stabbing).

It is a very sharp knife characterized by two sharp edges, making it a multi-purpose knife that requires a well-versed knife sharpener to keep the correct angle.

Most other pocket knives possess a flat or curving belly edge which is quite the opposite of the noncontinuous edge of a tanto knife.

As mentioned, tanto knives are specifically good for stabbing things, thanks to their reinforced and extremely durable tip. But, they also have a secondary use and secondary reinforced point, the draw blade, which is used for draw cuts and slicing – or clipping coupons, for that matter.

The nature of this blade makes it not very useful for food preparation; therefore, you are not very likely to ever see it as a chef’s knife. But, rather than a kitchen knife, many people use it as an outdoor or adventure knife.

How to Sharpen your Tanto Knife

Due to how they are manufactured, and the blade is formed, it can be a bit more difficult to get your tanto knife back to the desired sharpness. Since the tanto knife blade has two edges (the main edge and the secondary edge, on the tip), it can be tricky to sharpen your knife edge at a consistent angle.

No matter which sharpening tool or technique you use, you must ensure that you keep your edge at a consistent angle for the desired straight and sharp edge.

In the case of a tanto knife, electric knife sharpeners are not the best tools to use, as they can take away the blade’s distinct form in the sharpening process or even damage your tanto blade.

We recommend using sharpening stones. As one of the oldest and most frequently used methods to keep your knives sharp, it is also the most straightforward technique to sharpen a knife. As this is a manual process, you will have more control over your tanto’s knife blade edge.

Here is your step-by-step guide on tanto knife sharpening:

Note: when sharpening your blade, make sure that you always move your blade in the opposite direction as when you are cutting something with your knife and keep the angle consistent over the stone.

Another way to sharpen your tanto knife is to hold it over grinding wheels with fine grit.

Always refrain from over-sharpening your knife. This easily happens when you use diamond stones, electric sharpeners, or a v-sharpener. If you over-sharpen your knife, you might end up getting rid of the edge you just created. Or you might round the edge.

The worst outcome from over-sharpening your knife, however, might be that you are wearing your knife’s material down too much so that there is almost nothing left to sharpen or use, ultimately ruining your knife.

Here are some further useful insights on sharpening knives.

– At what angle do you sharpen a tanto knife?

That very much depends on the knife manufacturer. Generally, the best edge bevel for normal knives is around 20 degrees. However, that depends on the use.

Some tanto knives even provide two different angles due to their primary and secondary edges. Make sure you inform yourself about the correct angle for your tanto knife.

– Can I use an electric knife sharpener for my tanto knife?

Apart from the fact that they are incredibly expensive (if you want to get a somewhat high-quality electric one that won’t eat your blade up straight), you also often don’t have the opportunity to choose the angle you want your blade edge to be sharpened with.

So, if you decide to go for a sharper edge, you might not even be able to get that result with an electric sharpener.

We therefore always recommend freehand sharpening when it comes to tanto blades.

– Can I use a honing rod to sharpen my tanto blade?

A honing rod is usually not used to sharpen a knife but extend the longevity of a blade and to prevent it from getting dull.

A professional chef uses a honing rod between cuts to realign the existing edge on their knife, but it never sharpens it.

– What are the benefits of a tanto blade?

For starters, tanto knives are incredibly strong. The flat blade and high point form a triangle, one of the strongest knives that provides an excellent blade to stab through some of the hardest materials without snapping the blade.

Another benefit of a tanto blade is the resemblance to a chisel point. The thick tip allows for the blade to have more power and be more durable during use, as most of the metal count used can be found at the blade’s point. It, therefore, makes for a great defensive tool, as well as a survival tool, pairing strength and durability with a very sharp edge.

If you ever find yourself getting stuck somewhere, with a tanto knife, you wouldn’t have to worry about performing tasks such as chiseling or prying.

There is nothing worse than dull knives; whether those are your pocket knives or kitchen knives, we all prefer to use sharp knives in our daily lives and hobbies.

This is especially true when it comes to a tanto knife, which is mainly used as a self-defense or outdoor tool, so having a sharp blade is vital.

Therefore, knowing the right technique for sharpening steel and honing steel is important.

Sharpening a tanto knife is not that different from sharpening any other knife as long as you know your knife’s edge angle. Especially with this type of knife, it is vital to keep the precise edge angle for the primary and secondary edges and not round the serrated edges of your knife. 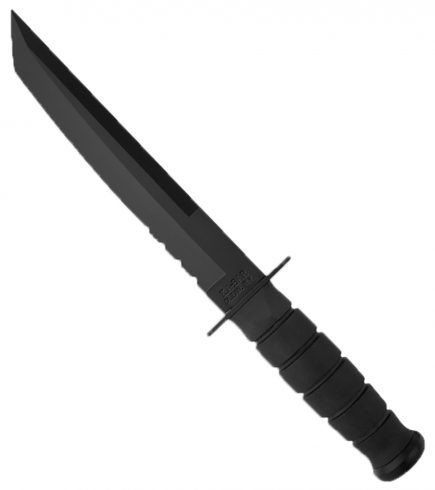 KaBar is usually known for one thing: their original knife, the combat knife first adopted in 1942 for use by the Marines, and then the US Navy. (The origin of the name goes back to 1923, when the company received a letter from a fur trapper detailing how he used one of their knives to kill a bear. The letter was partly illegible, and only “ka bar” could be made out of the phrase “kill a bear”. Or so legend has it). But the legendary knife-maker also makes a large variety of different knives and tactical tools. One we’d like to try is the KaBar Tanto.

Like Cameras? You Need The Peak Design Capture Clip

Carrying a camera on a strap can be somewhat awkward and uncomfortable on the trails if it’s swinging around and knocking into things. Sticking your camera in your pack, however, makes it hard to access when you need it – meaning you’ll miss great shots and those perfect moments.

There’s beginning to be all different kinds of smart clothing out there – from denim jackets to rain shells to workout shirts with sensors built in. But these are the first smart socks we’ve seen. The Sensoria socks are infused with textile pressure sensors, which are then each paired with a Bluetooth Smart anklet that counts steps, tracks speed, calories burned, altitude and your distance, and even measures your cadence and your foot landing technique.

Fujifilm Instax Mini 40 Instant Camera: A Pocket-Sized Blast from the Past