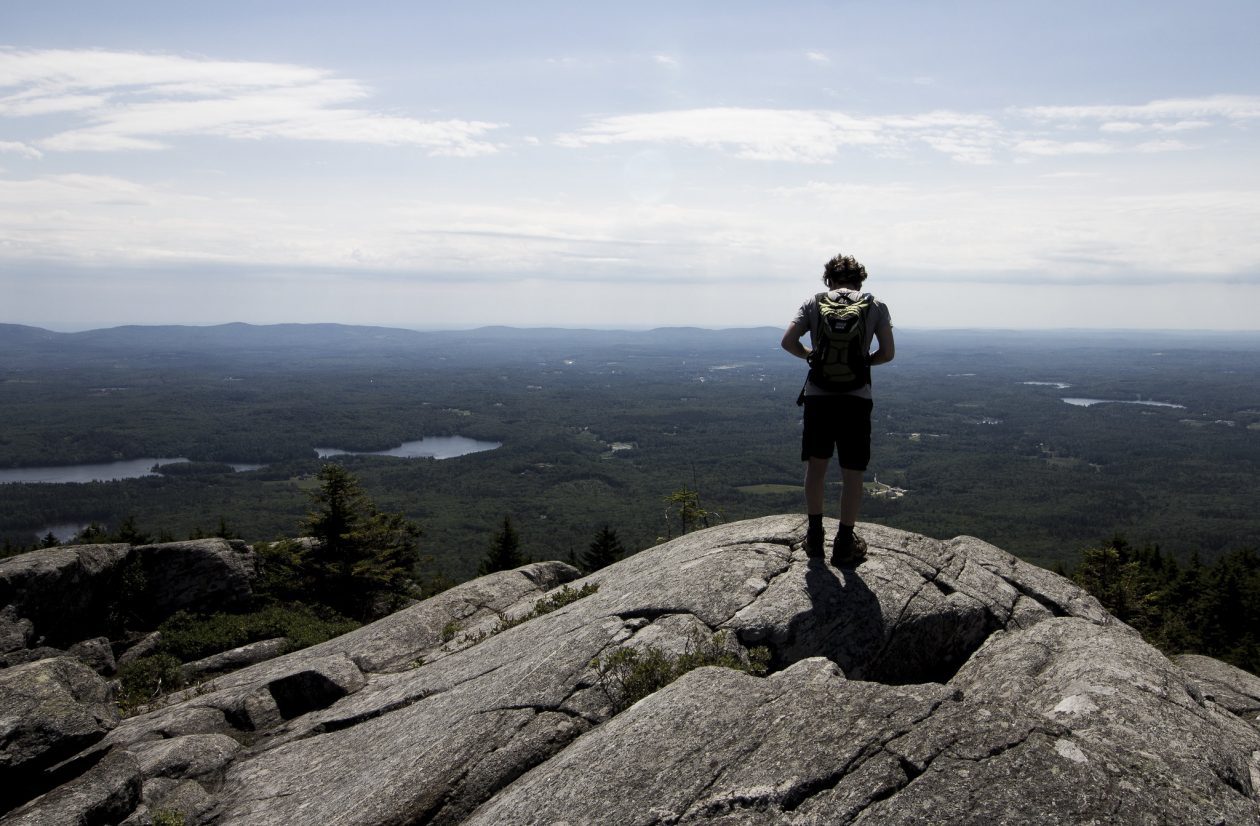 We all dream of climbing the slopes-less-traveled. Of discovering uncharted territory. Or of climbing the toughest, tallest most iconic peaks in the world – like Everest or Mt. Kilimanjaro.

But sometimes, the best adventures can be found practically in your backyard (if you’ll excuse the cliché). The most accessible ones certainly can. For those of us in Southern New England…finding that “backyard” adventure often means climbing the iconic Mt. Monadnock – a 3,166’ peak in southern New Hampshire that lays claim to the being the Most Climbed Mountain is the US (and 2nd most summited in the world, behind Mt. Fuji).

On average, over 125,000 people climb Mt. Monadnock every year. This is mainly because it’s less than 2 hours from Boston, and practically dead in the geographic center of New England. It’s the closest mountain for anybody in the Greater Boston area or for anyone coming up from Southern New England and is thus the go-to for quick day trips and weekend summits to get away from the concrete jungle.

Of course, with 125,000 annual visitors – Monadnock is busy during peak season. Most visitors come between May and August, when it’s not unusual to see literally thousands of people on the mountain each day. We wouldn’t quite call it Yosemite or Arches levels of crowded…but this park’s crowds befit its own unique size.

But come in early spring or anytime in the winter, and you might just have the mountain to yourself. At the least, you’ll have to share it with few others. With maybe a half-dozen winter summits of this mountain under our belts….we’d say that hikers on the trail are few and far between (until you reach the summit.

Time your trip right in the warmer months…and you may be able to get lucky and skip most of the crowds too. Here’s some stories + tips from some of our many hikes up this local favorite peak.

The History Behind Mt. Monadnock: A New England Classic

Hear us out on this one.

Mt. Monadnock may not have much recognition outside of New England, but it’s iconic in the region itself.

Monadnock Mountain – as Wikipedia tell us it is officially called on Federal maps – is a true New England classic. People have been hiking it regularly for well over two centuries, and as far back 1858 it was home to a hotel called the Halfway House. Sitting on the mountain’s southern slope…the Halfway House was a popular hotspot for vacationers and country getaways eager to take in views of the mountain’s unique peak.

Emerson and Thoreau were both frequent visitors. (Even if they didn’t stay in the mountain itself).

And the name Monadnock? Turns out this mountain is (sort of_ responsible for coining a term in the English language. It originally comes from just the original Native American name for the mountain – the “mountain that stands alone.” But these days, the term Monadnock is used to refer to any isolated mountain (called an inselberg in most countries). 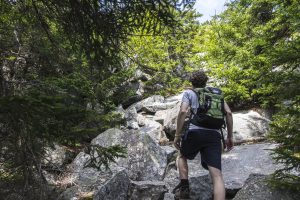 Hiking Monadnock – The Long and the Short (Way) Of It

The most common – and most direct – route up Monadnock is the White Dot Trail, which stretches only 2.2 miles from the parking lot to the summit. As the park’s most popular trail, it bears the brunt of the 125,000 annual visitors.

The White Dot Trail isn’t easy. It’s quite strenuous in some places. People tend to forget that despite their relative short heights (compared to out West), East Coast mountains are extremely rugged, rocky and rooty; much of the ascent here is more pulling yourself up steep uphill rocks by hand than straight hiking on a trail.

As you near the summit, however, things open up…and you’ll soon find yourself scrambling the last half-mile or so over exposed rock as you head for the summit. Easy and breezy in the summer…but tricky and dangerous in winter, requiring methodical and cautious approach (as well as crampons, as the bare rock becomes one solid sheet of ice).

Other popular and easy ascents include the White Cross Trail, which is longer than the White Dot but is mainly a gradual climb until the last mile or so; the Marlboro Trail, which extends only 2.2 miles to the summit from the west side of the mountain; Dublin Path, 2.4 miles to the top of the mountain; and Pumpelly Trail – the longest to the top at 4.4 miles and perhaps the most challenging.

Monadnock is also part of two long-distance trails – the Monadnock-Sunapee Greenway, which stretches 50 miles from Monadnock to Mt. Sunapee in Newbury, as well as the Metacomet-Monadnock Trail, which goes 110 miles from the Connecticut/Massachusetts border to the summit of Mt. Monadnock.

The Way We Do It: The Pumpelly Trail

With more than a dozen summits of Mt. Monadnock in the bag…almost all those ascents have been done via the Pumpelly Trail via Cascade Link.

This route-less-traveled is possible from two starting points; the State Park headquarters off Poole Road in Jaffrey, and the Pumpelly Trailhead off Lake Road in Dublin.

We usually start from the State Park headquarters, as the parking and facilities are better. After a long-but-gentle-sloping ascent up the main trail (which leads to both White Dot and Red Dot), you’ll diverge from the crowds via Cascade Link.

Continue climbing this scenic route slowly – through pine and deciduous forest and along side a bubbling brook, before splitting off again where the sign tells you to follow to Pumpelly Trail. 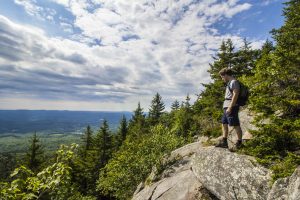 Be sure to bring lots of bug spray in summer; mosquitos are horrible in New England, and the lower paer of the trail is prime mosquito territory; dark (when green out) and very wet.

After a couple miles of this gently-sloped climbing, you’ll reach where the Cascade Link turns into the Pumpelly Trail. If you’ve gotten this far, you’ve left most of the crowds behind…and now have most of the mountain to yourself as you take this slower, more scenic and meandering approach up the mountain.

As you reach the treeline, you’ll start to tackle some steeper, rockier climbs. These require a good amount of scrambling, pulling and climbing to navigate – and sometimes even appear like sheer cliffs from the bottom.

But this is also where the views get good – and the going gets exciting; every mini-cliff you climb will reward you with a ledge to rest on, and an accompanying sweeping view of the New Hampshire countryside.

Again…to those of us with experience peakbagging out West, Monadnock’s “expansive views” may not reach the same level of “breathtaking.”  They don’t extend nearly as far…and snow-capped peaks are fewer and farer (though you can catch a glimpse of the White Mountains 80+ miles to the north, on a clear day.)

Along the Pumpelly Trail, you will come across a fun, popular landmark dubbed the “Sarcophagus;” a rectangular rock that bears a resemblance to its namesake. You’ll also cross a few alpine “lakes”; in reality, alpine bogs or pools that are full during the wet season (which is all year round, here in New England).

As you near the top, Monadnock becomes more and more exposed…and again, you’ll find yourself scrambling over exposed granite until you reach the 3,166’ summit.

Now that you’ve made it, grab a sandwich or snack and crack open that cold one you’ve been hauling in your pack.

Enjoy the wide views stretching all six New England states and New York on a clear day; to the southeast, Boston’s few skyscrapers are visible. Due south is Mt. Wachusett, a popular ski spot in Central Massachusetts. And to the north, the White Mountains, including the illustrious and legendary Mt. Washington, can be spotted, along with the accompanying Presidential Range (home to world’s worst weather – even in summer).

Monadnock is a simple hike, sure.

But it’s a trusty one that never disappoints. We return to it a couple times a year, whether to shake out the rust and warm up for the season, or to break out of that January cabin fever and want to get some winter hiking in (without the hazardous -40 wind chill the White’s present).

As for summer…well, if you company, you’ve plenty of it as you scale this enduringly popular peak.

MUST-READ ADVICE FOR EXPLORING WITH A METAL DETECTOR