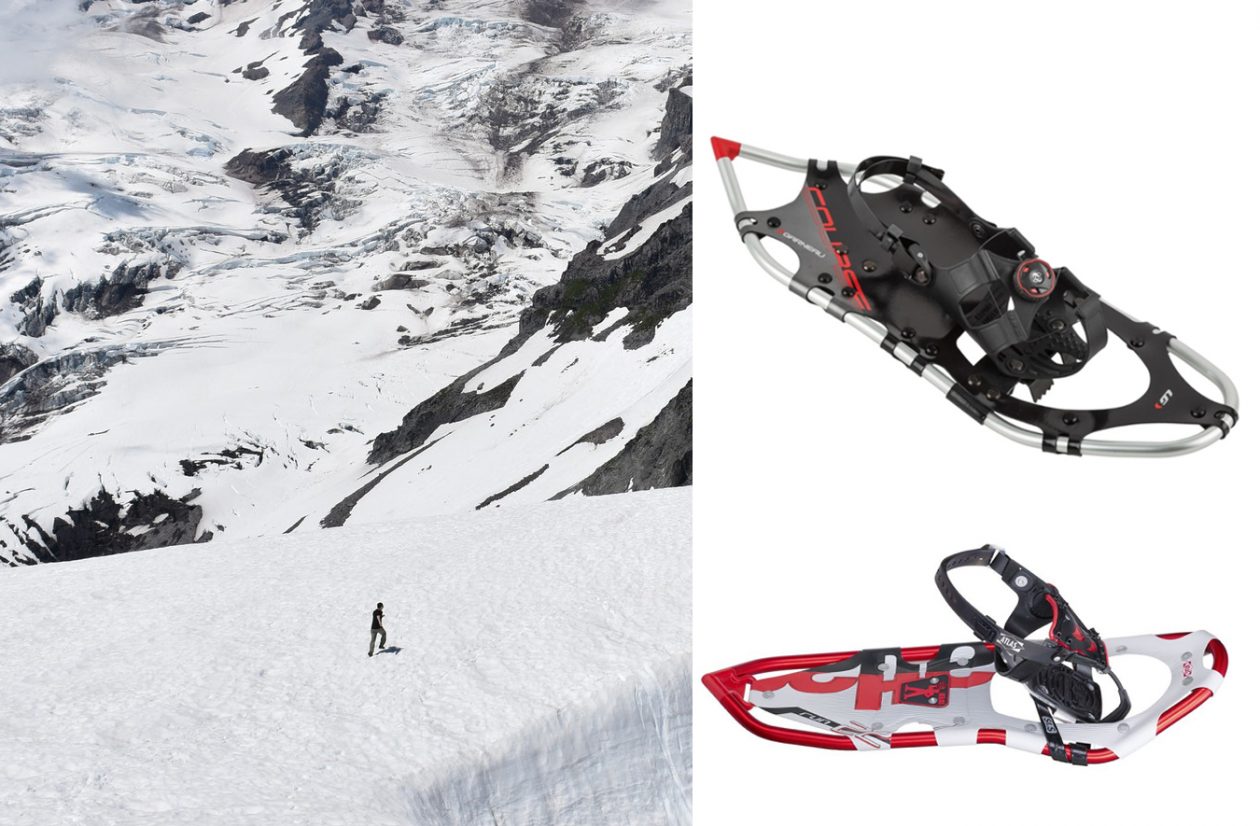 Why get running snowshoes?

With the dead of winter upon us, many people people are taking some time off from outdoor pursuits to stay warm and comfortable inside by the fire. For us, however, winter means we’re gearing up to tackle our favorite pursuits – just in colder and more inclement weather.  One of those pursuits is trail running.

A foot of snow certainly puts a damper on dashing down your favorite trail en route to a 6-minute mile. It can also make sprinting up hills near impossible – unless you’re outfitted with a pair of running snowshoes.

What are Running Snowshoes?

Running in snowshoes sounds awkward at first, unless you’re re using a pair actually designed for that purpose. Then it becomes fun.

Running snowshoes are designed with fast and nimble movement in mind. They’re shorter and narrower than regular snowshoes – usually coming in at 22″ long, sometimes 23″ or 25″.  This is because they are concerned less with floating on top of snow as they are with helping you run with a natural stride –  without smacking them together and tripping over yourself.  They’re also designed to be as light as possible – important for any runner.

With that said, the shorter size means they generally aren’t as good for loosely-packed snow as they are on harder pack. They also don’t perform well on icy areas, steep inclines or very rough terrain, as the crampons are (generally, but not always) smaller and less aggressive.

Like most snowshoes, running models generally have aluminum frames; aluminum offers a good balance of weight and durability. Composite frame and decking snowshoes are also becoming more popular among some brands and those who want the lightest shoe possible.

When it comes to traction, running snowshoe have less than backcountry snowshoes. The crampons are smaller and less aggressive, cutting down on weight less and allowing faster and more natural movement. Carbon steel and aluminum are popular crampon materials.

Bindings on running snowshoes aren’t too different from those on recreational snowshoes, but they’re usually designed to fit lightweight winter/waterproof running shoes, as opposed to bulky winter boots. Both regular rubber straps and Boa straps – are popular; Boa straps are found on snowboards and create snug, secure wraparound enclosures, making for a quick, easy on/off.

How Much Should They Weigh?

Ideally, your running snowshoes weigh less than 2.5 pounds a pair, or roughly 16-18 ounces a piece. It’s tough to find snowshoes weighing less than that, but they do exist –  the lighter the better when it comes to running.

The Best Running Snowshoes of 2019 – Our Picks 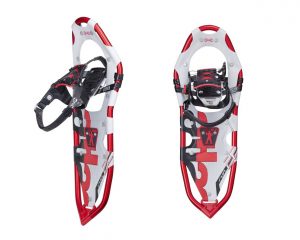 We previously deemed the Atlas Run a worthy pair of running snowshoes, and we still believe that to be the case. They aren’t cheap but they are worth the money. They’ve got a 22” long aluminum v-shaped frame that offers the perfect balance of flex and stability; Dual-Trac aluminum toe crampons; and Nytex nylon decking that is sturdy yet flexible, as well as quiet – something which a lot of composite or plastic deckings aren’t.

One thing not found on most other snowshoes is the Spring-Loaded Suspension (SLS).  The SLS keeps the shoe close to your foot for comfortable stride, but lets your foot move naturally. It also absorbs some of the impact while you’re running, and the flex lets your crampon dig in to snow more comfortably. The Boa binding enclosure is super easy to put on and cinch down.

They don’t perform as well on soft powder as they do on hard pack, and they may kick powder up behind as you run. But overall, the Atlas Run are serious contenders for the best running snowshoes of 2018, if not the best. They’re fast, nimble and low-profile. 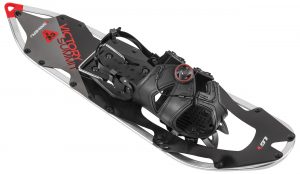 The Victory Summit are strict running snowshoes; they’re longer – 25″ – with more aggressive crampons than the Atlas Run or the Course Arc, below. This means they are more versatile, good for  icier terrain and deeper snow; the extra length adds flotation while the carbon steel Traxion HCS crampons add enough traction.

The frame is made of VT Pirahna – that’s lightweight yet hard aluminum – and the deck is a lightweight polymer; the polymer is good at shedding snow, keeping the shoes lighter as you run. The binding is a Boa closure that they call ContactTrek; it maintains flexibility and usability, even in freezing cold weather. Finally, the Freeflex X Pivot gives 30mm of suspension for a soft and natural stride.

Again, these aren’t running snowshoes per se – they’re more “snowshoes designed for moving quickly in varied terrain.” But they’re light and narrow, meaning they can double for running snowshoes when the terrain dictates more substance and traction. 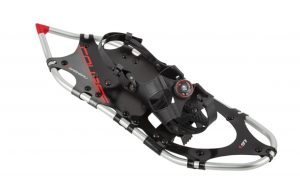 We did say it’s difficult to find a pair of running snowshoes weighing less than 2 pounds, but it’s not impossible; the Louis Garneau Course Boa Arc come in at only 1 pound, 10 ounces. They achieve this through super-light Momentum 7075-T6 aluminum frames ( anodized for strength and durability) and a polymer decking. They’re only 21” long, which means they don’t get a lot of flotation, but they make up for it with ultra-light, low-drag performance on the trail.

They have a curved arc for more natural footing, with lightweight black anodized crampons. And they’ve got Boa lacing, meaning they are good for ultra-quick cinching and on/off. The pivot is comfortable and enables mobility without being too flexible.

Overall, they’re a solid pair of running snowshoes – and the lightest on our radar. They retail in roughly the same range as the Atlas Run – and are their closest competitor. 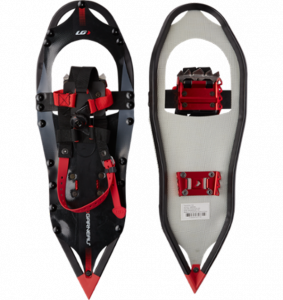 If you’re noticing that Louis Garneau is cornering the running snowshoe niche, you’re not alone; the Transition 723 are another good choice. They aren’t as light as the Course Boa Arc, coming in a 2.2 pounds, but with a narrow, 23” frame, they’re more than light enough for most use. That frame is made of Perimeter+ – anodized aluminum designed for traction on all sides and edges. The Lightec decking is designed to stay flexible and absorb shocks in below-zero temperatures.

The aluminum crampons are what Garneau calls “Aggressive Assault”; 360-degree traction that remains firmly planted in the snow as while your foot steps and pivots. And with a Boa closure, the Transition are easy to put on and take off – even in freezing cold conditions. They’re also designed to “optimize” the way your feet stay with the snowshoe for stable footfall in all conditions.

Yet another good pair of running shoes from Louis Garneau, perfect for when traction and stability count. 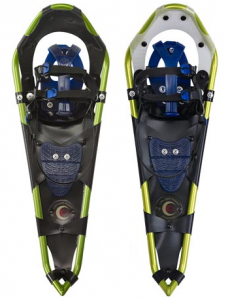 Another classic of racing snowshoes, the Crescent Moon Gold 12 are made for moving light and fast – despite being the heaviest pair on our list; they weigh a full 3.1 pounds per pair.

At 24.5” long  and 8.1” across, they offer more flotation in extra-deep snow than other racing shoes do, without being too big; the tapered shape keeps your heels from smashing together as you run.

The aluminum frame is complemented by a quiet nylon decking that feels substantially better than plastic frames, and they feature a Single Pull Loop binding that fits athletic shoes well and doesn’t need adjusting. There are 3 large, aluminum crampons on the underfoot.

Our only complaints revolve around those crampons, and the extra length. The crampons are located right under the arch of some runner’s feet, which results in a very awkward step. Second, some people just find the extra-length hard to run in. Length helps with flotation but those extra 2”-3”  feel awkward when running.

Otherwise, the Gold 12 hold their own against some other racing snowshoes. We prefer the light weight and small frame of the Atlas Run or the Course Boa Arc, but if you see yourself needing some extra flotation for running in deep snow, Crescent Moon deserves a look.

To reiterate, we still feel the Atlas Run and the Louis Garneau Course are your best bets for good running snowshoe; they offer the best combinations of low weight, durable frames and natural stride and footing.

All the snowshoes we selected are in roughly the same price range, too; exact asking price varies a lot depending on stock and website, but you should be able to grab any one of these solid pairs of racing snowshoes for between $150 to $200.

Just remember the main qualities you’re looking for in a pair of running snowshoes – weight, profile and size, flotation, and traction, as well as comfortable and easy-to-use binding. Think about how fast you like to move, how deep the snow you tend to run in is, and how icy or rugged the terrain tends to be. Finally, make sure the snowshoes fit with your preferred winter running or waterproof shoes.

4 Straight Razors To Amp Up Your Shaving Routine