Laptops are increasingly becoming an alternative to desktops for gaming. Modern laptops come equipped with high tech heavy duty components that are capable of the same performance as their heftier desktop cousins. The main benefit of gaming laptops over desktops is portability. In the past, portable gaming devices paled in performance compared to desktop rigs, but now the scales have equalized and gaming laptops are taking their rightful place on the gaming stage.

Gaming laptops are also very good for non-gaming use. The high-end processor and graphics cards make them super useful for 3-D modeling, running simulations, editing video, and streaming. So a gaming laptop can be an excellent choice for work even if you are not a gamer.

With that in mind, we have ranked and compared some of the best gaming laptops on the market and narrowed it down to the top 5 options. Our chosen laptops have been reviewed based on their processing power, graphical capabilities, multimedia functionality, and additional features. Without further ado, let’s get to it.

First up is the Acer Predator Helios  15” gaming laptop. The main draw of the Helios is its value proposition. At just over a grand, the Helios comes with a beefy  i7-7700 processor and Nvidia GeForce GTX 1060 6GB GPU. The strong processor and graphics card can lock down 60fps on near max setting for most games released in the past few years.

The Helios is one of the better budget gaming laptops out there. It has an increased capacity 16GB RAM and a dual drive 1TB HDD/236GB SSD so you can load your games on the solid state for fast performance. The screen does not have very many fancy settings, but it does have a high 144Hz refresh rate to minimize stuttering and screen tearing.

It’s not bad on looks either. The laptop is covered in a matte black plastic finish that is tough and durable. It is not very slim and light though, as it has wide screen bezels, a thick body, and weighs about 500g more than the lightest 15’ laptops. The thicker body does allow for a full sized keyboard with a numerical pad. Around the side of the body are plenty of connectivity options with a ethernet port, USB-C 3.1, HDMI, and SD card reader.

Let’s start with the obvious, the Alienware 17 R5 has a big-honkin’ 17” screen. The huge screen is great for games that require a wide range of vision, like FPS titles and handle resolutions from 1080p to full 4K. The R5 comes in 2 models that have an i7 and new i9 cores respectively.

The standard model comes equipped with a NVIDIA GTX 1060 GPU and 8GB DDR4 RAM. Even the base model packs a punch and can play most modern games in 60 fps at medium to high quality. The advanced model comes with a GTX 1080 GPU and up to 32GB of RAM, which adds even more power and graphical fidelity.

Despite having a 17” screen, the R5 is rather light for a gaming laptop at only 9.7 lbs. The large screen is matched with a full-sized traditional keyboard and massive touchpad. Around the sounds are a generous amount of connector ports: USB 3.0 and 3.1 ports, HDMI, Ethernet, microSD and a Thunderbolt 3.0 port. It also has a proprietary port for the Alienware Graphics Amplifier.

Lastly, the Alienware has the Tobii Eye Tracking system that can read eye movements and translate them into game inputs, such as controlling the camera and auto aim. The Tobii Eye tech is compatible with over 100 games with more updates adding content periodically.

The MSI GS65 Stealth Titan is an amazing gaming laptop that squeezes high-quality desktop performance into a tiny 4.1 lbs gaming laptop. At only 0.7” thick, the Stealth Titan is the company’s slimmest laptop yet. Don’t let the size fool you though, this thing is a competent gaming laptop. It comes equipped with an  8th gen 6-core Coffee Lake processor and the manufacturers somehow found a way to fit an entire NVIDIA GTX 1070 Max-Q GPU into the tiny body.

The display only comes with a max 1080p resolution but it does have a high 144Hz refresh rate. This should help cut down on screen lag and tearing. The display can output over 150% of the sRGB palette which is higher than the 141% average.

As far as performance goes, the Stealth Titan plays extremely well. Graphics are high fidelity and the processor keeps a high fps on high to ultra high setting for most modern games. It can also handle some VR applications, but maybe not the most cutting edge ones. It is also able to keeps at least a 6-hour battery life despite the performance demands of the hardware.

Despite being thin, the keyboard is not shallow. Each key has a 77mm profile and is very responsive to presses. It also has plenty of connector ports for all your multimedia devices. 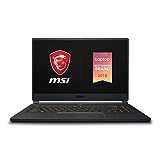 ASUS’ ROG line of laptops are made for gaming precision and the G703GI is no exception. First of all, this thing is a beast of a laptop both size wise and performance wise. The G703GI is the updated model of the G703 and adds a bunch of new hardware specs for better performance. Tantamount is the Intel i9-8950HK processor combined with the older but still competent NVIDIA GTX 1080 GPU. The laptop can produce extremely high fidelity visual on graphically demanding games such as Shadow of War of Shadow of the Tomb Raider.

We did say it was a beast in size. The G703GI has a big 17” screen and weighs around 10 lbs. It is pretty thick so it may be hard to take around in a laptop or carrying bag, but that is a necessary trade-off for the high-performance hardware it is made out of. The build is very solid, made out of a cast aluminum, and the keyboard is very deep for a gaming laptop and not prone to stuck keys.

The G703GI also comes with special Gamecaster software for streaming integration and a dedicated button that pulls up Asus’ Gaming Center Software, where you can tweak performance to your specifications. Unfortunately, the battery life is not very good, only lasting about 2 hours while playing a 1080p video file. This is to be expected though with such a powerful processor and GPU. so that means yo most likely have to keep it plugged in, but that shouldn’t matter much if you are using it for home gaming. 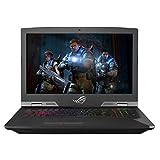 The last item on our list is a gaming laptop from Dell. The Inspiron 15 7567 is not the most powerful gaming laptop out there, but it’s hard to find something as good with a comparable price. The inspiron 15 offers a GTX 1050 Ti GPU, an upgrade over the lesser GTX 1050. The processor is an i5-7300HQ quad-core so it does have some toughness, though not as much as the newer i7 and i9 models. In short, the Inspiron is a great laptop for gamers who play a lot of indie titles or other not so demanding games.

The screen is 15.6” and has a max resolution of 1080p. While many games nowadays are compatible with 4K monitors, many gaming laptops do not have the specs to take full advantage of this capability, so 1080p is a perfectly fine resolution.

The Inspiron does exceed in battery life. A single charge can last up to 8 hours unplugged so it is very useful for work or school. Coupled with how light and thin it is, it is a very portable laptop that is good for being on the go. 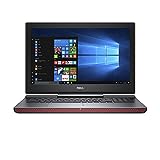 What to Look For in a Gaming Laptop

In general, the features you look for in a laptop are the same as you would look for in a desktop, processor power, GPU, screen resolution, and connectivity options. Let’s go over each of these features in detail.

So if you want your computer to handle the many calculations per second modern games require, you need a good processor. Most processors used in laptops are made by two manufacturers, Intel and AMD. Most gaming laptops contain a processor that is at least an i5 or higher. In general, the faster and better the processor, the faster your games will run.

A graphical processing unit (GPU) is the main processor that handle rendering graphics on the screen of your computer. Most non-gaming laptops do not have a separate GPU and instead run graphics integrated on the CPU. Modern games require a lot of resources to produce the high fidelity graphics so gaming rigs have dedicated GPUs that are dedicated specifically for graphics.

Right now, the two main manufacturers of GPUs are NVIDIA and AMD. In general, NVIDIA has higher quality products but they are more expensive. Both NVIDIA and AMD have fantastic lines of graphics cards though and either one makes a good choice for a gaming laptop.

GPUs tend to be big, so the more powerful GPU your laptop has, the bigger and heavier the laptop is likely to be. Some laptops, like the MSI Stealth Thin buck this trend and have an extremely powerful graphics card in a tiny package, but the general rule still holds.

Screen resolution basically is a measure of how many pixels wide and tall your screen is. The higher the resolution, the higher the graphical quality as more pixels-more detail. Most gaming laptops are at least capable of running games at 1920 x 1080 resolution (1080p HDMI) but more and more laptops are stepping up their game to handle HDR and 4K resolutions.

Be warned though, even if you buy a laptop with an amazing screen, you need to have the right hardware to take advantage of it. A great 4K display doesn’t matter much if your CPU and GPU can’t handle 4K performance demands. So if your desired laptop has a 4K screen, make sure it can actually handle rendering 4K video.

Along with resolution, there is screen size. Screen size on computers is measured by the diagonal, so a 15.6” laptop measure 15.6 inches diagonally across its screen. Most gaming laptops fall into either 15.6” or 17” screen models, though smaller and larger screens exist.

Laptops are praised, in part, for their multimedia compatibility. Most laptops nowadays feature a side panel with several ports for other electronic devices. A the very least, a gaming laptop will have an HDMI output and a few USB ports for thumb drives, controllers, gaming mice, fan controllers, etc.

So which gaming laptop is the best? As always, the answer comes down to your needs. The best gaming laptops have strong processors, high-end GPUs, high-fidelity resolutions, and multiple connectivity options.

Gaming laptops are a great compromise for someone who wants a solid gaming PC that they can take around with them. Unfortunately, very few current laptops will be able to stack up to a high-end desktop build, but as time goes on and computing technology advances, that gulf may soon be completely covered.

Shocktato Party Game: Not Mr. Potato Head By Any Means

Turn Streaming into Hi-Fi With The Dragonfly Cobalt DAC

Amazon Key is Now A Thing – But Is It a Good Idea?