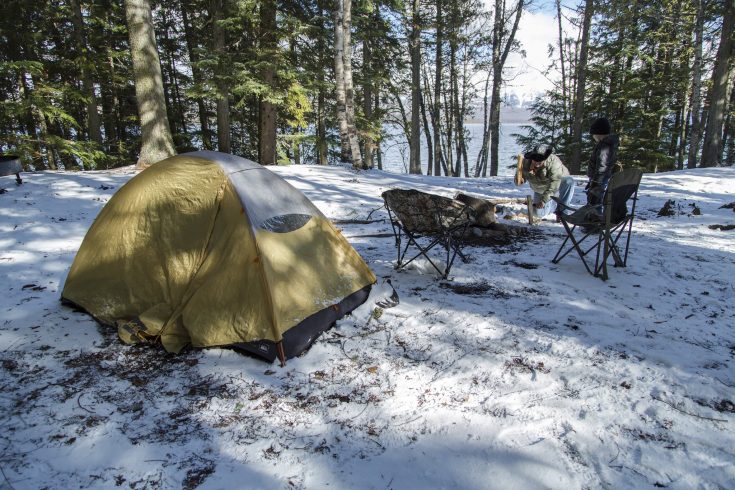 9 of the Best Four-Season Tents for Winter Expeditions

No, it’s not too early to start looking for a good four-season tent. With Labor Day upon us, Autumn is just around the corner. And in most parts of the Northern Hemisphere, that means the temperatures are going to start dropping and snow will start falling, especially for those of us at higher elevations. Time to start gearing up for winter camping.

No, it’s not too early to start looking for a good four-season tent. With Labor Day upon us, Autumn is just around the corner. And in most parts of the Northern Hemisphere, that means the temperatures are going to start dropping and snow will start falling, especially for those of us at higher elevations. Time to start gearing up for winter camping, and we’ve selected the best four-season tents to help you out.

A good four-season tent will have a few key features that make it ready to handle the cold, wet and wind that makes camping a challenge – and a lot of fun. The first thing to look for is whether your tent is double-wall or single wall; we wholeheartedly recommend double-wall tents, as it essentially provides twice the protection that single-wall tents do. This, of course, is something you may have to decide for yourself; a single wall tent is lighter, but a double wall is stronger and warmer. You’ll obviously want a rain/snow fly, and pay attention to ventilation. Condensation tends to build up in the tent as we breathe, and it’s important to keep it from accumulating on your sleeping bag and clothes if you desire to stay warm and dry.

Lastly, pay attention to the pole design, and the guy lines. You want to be able to properly tie down and guy out your tent, to protect it from the high winds and snows winter camping will subject you to. This is especially important if you’re camping above tree-line.

A tent we have extensive experience with, the Alps Mountaineering Tasmanian 3 is a very affordable, yet durable and thick, four-season tent. It’s large enough for 3 people and feature a very large vestibule, which is perfect for cooking and storing gear out of the elements. The rain-fly perfectly covers the vestibule and keeps you warm and dry.

Another more affordable option, the Arete ASL 2 comes REI, everybody’s favorite outdoor outfitter. It costs about the same as the Tasmanian 3, weighs 2.5lbs less, and has enough room for 3 people quite comfortably. There is the obligatory rain fly, a vestibule and the whole thing is color coded for quick, easy set up. Though it’s not the sturdiest or toughest four-season tent you’ll find, the Arete is very light and the perfect combination of backpacking weight and four-season readiness.

Still moderately priced for a four-season, the Thor is a bomber-style tent with enough room for 2. The six-pole, DAC design is made for extra high-winds. The tall walls keep condensation from forming right above you, the 40D nylon is extra thick for keeping out the elements, and there is a poled vestibule for some extra space out of the snow.

The North Face Bastion is a true, 4-season beast. It’s large enough for 4-people, has two doors and two vestibules. It’s got a 70d nylon floor and 40d nylon fly, both of which are PU coated for durability and water-resistance. It’s literally a bastion against whatever storms the mountains might throw at you, and while it’s not light (8.9 lbs) when you’re looking for something to weather out the snow, it’s got you covered.

Heading high up? As in, out of the trees and into the unprotected? The Bombshelter is one tough 4-person, 4-season tent, with a free-standing, single-wall design that gets rid of any need for a fly, shaving weight and making set up much faster. It’s made of waterproof Todd-Tex fabric, which remains light and breathes well, keeping condensation from building up and getting your bag wet overnight. The 4-pole design is made for serious alpine weather, and you can be assured that the Bombshelter will keep you warm and safe in even the most inclement of conditions. Basecamp just got comfier.

The Jannu is another tough, durable four-season tent made for extreme alpine conditions. It’s double-walled, made of Kerlon 1200 fabric, and features beefy 9mm tent poles. The outer walls extend to the ground, which helps improve ventilation and airflow, and the mesh panels are backed with adjustable fabric panels so they can open and closed as you see fit. Where it really shines, however, is in the snow; the design and sidewall keep snow off as it falls, but still hold quite a bit for when it really snows and piles up. All the while, it remains only 6 lbs. – heavy, but quite light for a tent of its caliber. It also costs an arm and a leg – but if you’re heading into the alpine zone, it pays to be outfitted and equipped.

It would be hard to make a list of four-season tents without mentioning Mountain Hardwear’s single-walled, snow-ready offering. They’ve named it after Ed Veisturs, the first American to climb all fourteen of the World’s 8,000-meter mountains, and have built a tent he’d be able to use. It is single-walled, but notably strong, featuring DAC Featherlight poles and laminated Polyurethane reinforcements on the fabric. It’s also got an array of features designed with mountaineering in mind; a floor zipper for cleaning out snow, large vents and 2 SVX windows, welded zipper flaps, and an extra-large vestibule.

Overall, the EV2 is a bombproof shelter for cold-weather, high-alpine conditions – and they’ve managed to make it exceptionally light at only 4.7 lbs. It’s easily one of the most versatile, best four-season tents we’ve seen.

The MSR Access isn’t quite built for the extreme conditions that the EV2 or Jannu 2 are, but that just means that it is extra-light and easy to carry, weighing in at only 4 lbs when packed. The floor is 30d nylon, polyurethane and DWR coated to keep you dry on the ground. The top is mesh which keeps it light and cool, but of course, features a light, water-resistant rainfly. In addition to sleeping two, the extra-large vestibule provides ample room for gear and cooking. It’s definitely not climbing Denali with you, but the whole setup and weight are perfect for light backpacking while providing warmth and protection from the elements.

The Nammatj GT is built for basecamping. It uses a tunnel construction, which maximizes space, and features an extremely large vestibule for keeping out of the snow. It’s also the most hardy tent we’ve seen so far, with Kerlon 1800 fabric and 10mm thick poles. The separate inner and outer walls make pitching simple while offering protection. The the Nammatjs GT only has enough comfortable sleeping space for 2, but the large design makes it suited for serving as basecamp on trips of different demands; it’s light enough for lesser, lighter trips, but also burly and sturdy enough for the extreme conditions alpine expeditions demand.

If you’re looking to cut down on weight for extended backpacking, the Warmlite 2r is the lightest 4-season tent we’ve seen yet, coming in at only 3lb and 4 oz when packed. It is ultra-light, and features no guy lines – so you’ll need to put extra care into properly securing it in wind and snow. It also requires only 3 stakes, and the low-profile keeps you out of the wind, while still offering ample room for 2. Again, it’s pretty light, so don’t expect to bring it into extreme conditions – but for the price, you get a solid, light, packable tent for backpacking and ski trips.  Also, it’s made right at home in the USA. 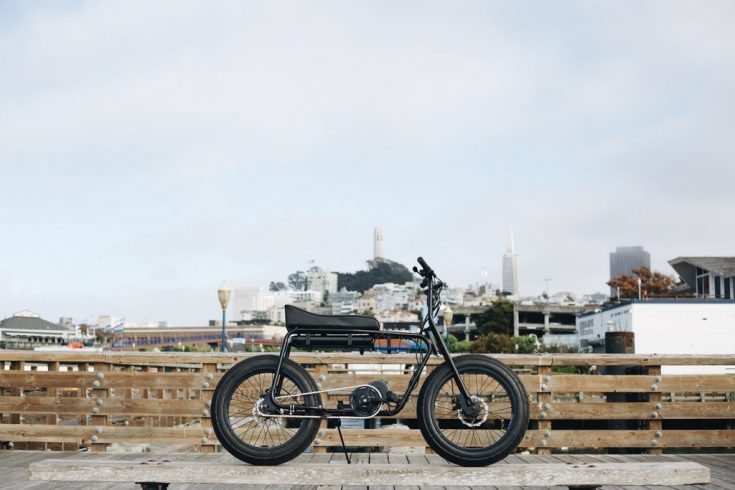 This is the electric motorbike your mom wouldn't let you have! The Super 73 Electric Motorbike has an amazing cruising speed of 27 miles per hour. This is definitely a design from the past (uses a standard bike frame design) but technology of the future (uses a rechargeable lithium battery).

Wild Zora: Meat and Veggie Bars For The Health-Conscious Adventurer

Grab A Bottle of Naked Grouse Whiskey This Fall

We’ve reviewed a lot of good whiskey, but we’ve yet to really see a whiskey as unpretentious, and as unlike the brand’s usual offerings, as Naked Grouse. Created by the makers of The Famous Grouse, maker of classic Scotch whiskey, Naked Grouse is what the distillery calls “whiskey at its most uncomplicated,” and uses “first fill” sherry casks in which to age the whiskey. This slightly-unusual (though not unheard of) aging vessel imparts a much sweeter, fruitier flavor to their spirits - and one that gives the drink it’s slightly cheeky personality. (Don’t believe us? See the website.)

In a world that is (increasingly) full of luxury SUV's, few compare to the Cayenne Turbo. Don't get us wrong, BMW and Land Rover know how to compete, and it seems like their are constantly packing more and more horsepower into their beautiful machines. But when it comes to pure stately luxury and elegance combined with power, the Cayenne Turbo is a whole 'nother level.

Relive Is The Aptly-Named Cycling App You Need

Put simply: Relive is the cycling app that lets you relive your adventures, virtually. How, exactly? Relive uses data collected from your GPS, or phone app – such as Strava – to recreate your ride into a 3d animated video.

What are the Warmest Gloves Ever? It’s A Tie

No – there is no objective way to measure the warmest gloves ever, but that won’t stop us from trying. We suffer from chronically cold hands, to be honest, and the vast majority of gloves just won’t cut it when the temperatures drop into the teens or naughts.