Cross Bailey Mini-Review (And The Best Cross Pens of 2019)

With history going back over 170 years, A.T. Cross is the oldest pen manufacturer in the US. Founded in in 1847 by Richard Cross, the company’s first products were golden and silver cases for wooden pencils. Since then, they’ve become one of the most respected – names in penmaking. So much so that, out of all the great penmakers out there, it’s Cross that has been supplying Presidential Pens to the White House since the 1970’s, with an official deal being kicked off in the 1990’s.

While you can find yourself a more expensive pen, you’ll be hard pressed to find a better pen than Cross for the price range (in our opinion, at least). And after using a classic Cross Bailey for several uses over the past few years, we’ve come to respect and appreciate these pens quite widely. Here’s what we think of our Cross Bailey – and some picks for the best Cross Pens of 2019 according to some pretty wise folks. 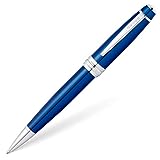 The Cross Bailey is a classic ballpoint pen and a veritable workhorse. It’s also one of our favorites. Fastened from a sleek and beautiful metal, it comes in several colors; we have the Chrome Medalist – also the most expensive – but it comes in Blue Lacquer, Red Lacquer and Black Lacquer as well. It’s hefty, but well-balanced and easy to wield – inspiring confidence in your hands. The large but classic cap pops on with a solid clip and needs a good tug to really get off – so you know it’s not going anywhere.

The slightly textured black grip makes it easy to hold onto and comfortable to write with. And the medium stainless-steel ballpoint is the perfect width and weight for most everyday writing, from signing check to filling out paperwork and taking notes. The ink flows freely.

If you’re looking for a timeless, totally classy pen with both modern and classic appeal – you certainly can’t go wrong with the Bailey. We love keeping it on the desk or carrying it around with our favorite Moleskine knock-off. 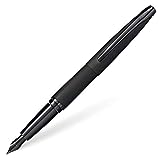 The Cross ATX is a distinctly modern pen with some serious appeal. It’s the perfect blend of high-tech EDC pen and classic fountain pen aesthetics, and we’re digging it from afar. Machined from a sturdy metal, it has diamond-patterned, “machine-turned” engravings for some texture and some looks, with a click-off cap – just like the Bailey. A “precision-ground” stainless-steel nib makes writing precise and effortless, while the ink flows freely. Many users feel it doesn’t write quite as nicely as Cross’s ballpoint pens, despite the higher price tag – but find the modern looks and style help make up for it. If you’re the fountain pen type, however – you probably won’t care. 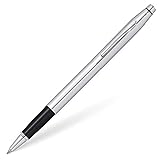 The Classic Century is Cross’ best-selling pen and based on looks alone – we can kind of see why. A mainstay of writers, note-takers and office workers everywhere, it’s a sleek, modern pen that kind of reminds of the Fisher Space Pen – if not slightly thinner. And it comes a in a whole lineup of colors – from the timeless chrome Lustrous to the luxurious Brushed Rose Gold. A slim cap with engraved details protects the writing point while also adding some flair. And it has a Gel Ink rollerball tip that, according to many users, flows quite freely. They slim shape, paired with the solid feel and weight, is another major selling point for many. All we know is that it looks awesome.

1945 Barge Knife by Kershaw Has A Pry Bar Built In