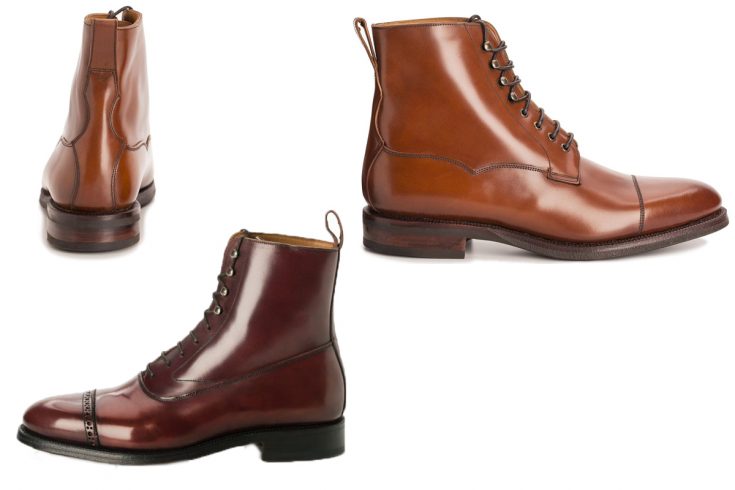 What is Shell Cordovan?

Shell cordovan Is a special horse leather made from the “shell” of leather found under the hide on the horse’s rump. It originally comes from Cordoba – from which the name derives, too – and has been made for at least 1500 hundred years.

When it spiked in popularity over the last century or two, it was reserved for more casual pieces, like work boots, as well as accessories, like leather strops. This was because it’s so thick and tough;  the less-porous consistency than most leathers means it is naturally more water-resistant than most leathers and less likely to stretch.  It was also used for other leather goods, other than shoes, where people wanted a high shine, almost mirror like finish; since it’s less porous, it holds a glossier shine and natural gleam.

That’s also why Cordovan is such a popular material for dress shoes.  (Since it’s so labor-intensive to produce (more so than most leathers) it’s also more expensive). And the natural toughness also means it is a good choice for winter dress shoes and dress boots, which need to handle more exposure to water, salt and other gunk than a pair of dress shoes worn only in summertime does.

These days, shell cordovan may not be as popular as it once was, but it’s still an extremely dressy and downright classy choice of leather for dress boots – and for casual ones, too. But since it’s pricey, it can also be hard to find a lot of options for boots that are true shell cordovan.

If cordovan’s natural shine and thick durability intrigue you, here are some of the Best Cordovan Boots you can snag around the web right now. Just be warned: most of these are pretty pricey, so you might want to put away that wallet and avoid making any impulse buys.

The Best Shell Cordovan Boots of 2019: Our Picks 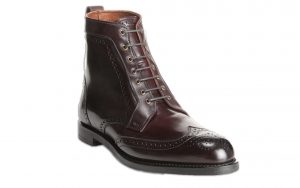 Might as well as get the best of the best out of the way first. American classic Allen Edmonds’ Dalton is hardly an inexpensive boot, but it’s one the finest cordovan boot you’ll find. It’s handcrafted in the USA from Genuine Horween Shell Cordovan with a 360 Bench Welt, on the welted 511 Last. Like all Allen Edmonds’ shoes, it’ll last virtually forever and can be easily resoled and recrafted. The sole is a Double Rendenbach leather sole.

The Dalton is an investment, but it’s one that will last virtually forever, and is versatile enough to be worn in both dressy and casual situations. But some of the best. 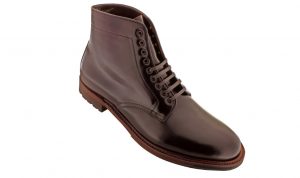 If you thought Allen Edmonds were expensive, you haven’t seen nothing yet. Alden has been making fine shoes just as long and, in many opinions, makes even better offerings. We do know they are much more expensive.

These boots use Genuine Shell Cordovan leather, paired with a Commando Sole on a Barrie last. They are handcrafted in New England using a Goodyear welt, and like a good pair of Allen Edmonds, should last virtually forever.

For that price, they better last that forever. 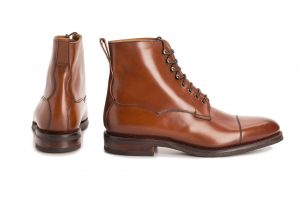 Spanish shoemaker Meermin makes excellent, top-quality boots – often for half the price of their bigger competitors, like Allen Edmonds and Alden. These Shell Cordovan boots are crafted from Italian leather, sourced from a family-owned tannery in Tuscany. You can practically just smell the authentic quality and craftsmanship dripping off them….

Unlike most other cordovan boots, which come in the traditional burgundy look, Meermin’s Italian shell cordovan boots come in both brandy AND burgundy. As lovers of a good light brown, we naturally gravitate towards those.

Construction hits all the high-end shoe notes: Goodyear welt on a HIRO last, with a smooth double rubber sole. Like Alden, you’ll be wearing these boots for decades to come. You’ll just be spending half as much. 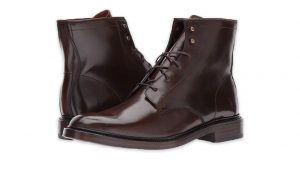 Frye often straddles the line between mid-end boots and higher-end ones, but these Cordovan James boots are definitely at the higher end. Made from Horween Cordovan leather, they’re handcrafted with Frye’s high-end precision, with a leather outsole and leather lining, too. The color is a unique dark brown that, like the Meermin boots, strays a bit from the traditional Burgundy. Beautiful shoes for any occasion. 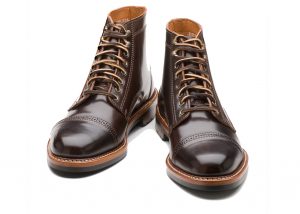 Another top-of-the-line pair of boots crafted from Horween shell cordovan, the Porter Boot strikes a good balance between dressy and ruggedly casual; they look right at home with some wool dress pants but won’t look out of place running around town, either. Rancourt hand-dyed them into a rich brown they call Espresso; we call it beautiful.

They’ve got a Blake Welt Stitch Construction that can be resoled for years to come, a Montello mini-lug heel, and a leather midsole with a storm welt, which is engineered to keep water and grime buildup from getting in there, between the welt and the sole. All handmade in Maine.

Yeah, they’re still super expensive –  but these aren’t typical department store fare. These are real boots, for real wear in all kinds of weather. 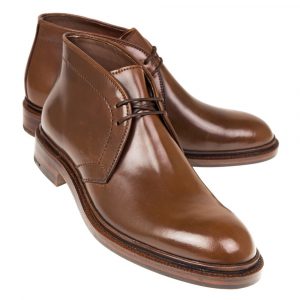 Time for some chukkas, eh? Carmina – from Spain – makes some of the world’s best shoes, and these Cordovan chukkas are a veritable work of art.

Like many others on this list, they are made from Horween Cordovan, this time in a gorgeous Armagnac brandy brown. They have a storm welt JR Rendenbach leather sole, 360-degrees to keep water and grime out, and is built on Carmina’s Calvia last.

If you’re looking for a pair of chukkas, instead of a full-on pair of boots, these are your answer. You just need to be able to afford the $850 price tag. 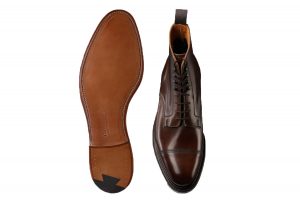 We’ve saved the most expensive for last. These straight cap Derby boots ask for almost $1200 brand new. We’d say that’s ridiculous, but they are just so dang good looking we’re willing to entertain it. They’re made from true shell cordovan leather on Crockett and Jones’ 341 Last, with double leather soles, and handcrafted right in Northampton, England – where the company has been making shoes since 1879.

It might cost a whole paycheck, but we’d bet you’d wear them the rest of your life. 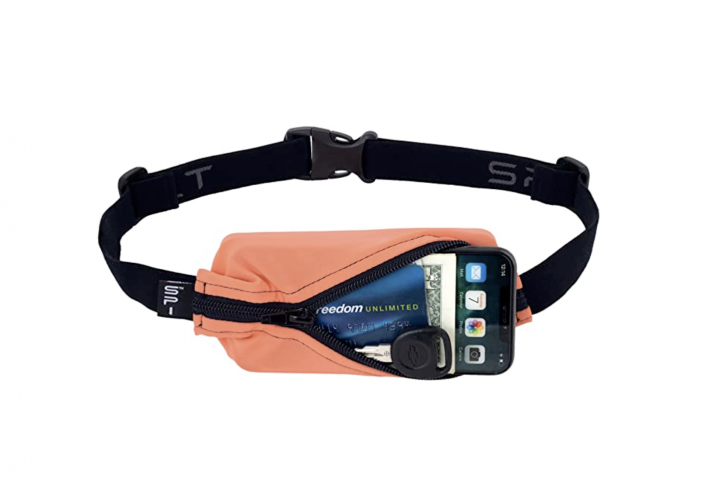 VW has been busy in recent years in adding to their new SUV focused line, having added the big, spacious new Atlas to their lineup last year. And now they are complementing that with a smaller, compact SUV, the T-Roc. VW used the name “T-Roc” in the past, on a concept crossover, but they’ve now put it to good use in this sporty, 4-door compact SUV that fits right into an ever-growing market.

GoPro HERO9 Black: The Best Action Camera There Is?

It's the gift-giving season and the Pentel Pens Premium Gift Set is perfect for anyone, men, women, architects, draftsmen, artists, and enthusiasts. Even the person isn't a graphic artist, he or she will appreciate the quality in this set. The 4mm tip design makes it ideal for use with rulers and templates. A unique, dual-action retractor advances and retracts the Pencil tip to protect lead from breaking. The built-in lead hardness indicator allows you to easily identify your lead type. It comes pre-loaded with super Hi-Polymer HB lead, which never needs sharpening and produces a clear dark line. The finely chiseled metallic grip inlaid with soft, latex-free pads makes extended writing and drawing comfortable.

Maybe if you are a connoisseur of Scotch, you’ve had Balvenie. But most of us Americans haven’t heard of it. Balvenie is a line of rare single cask Speysides from Malt Master David C. Stewart MBE, created and distilled in Dufftown, Strathspey, Scotland.