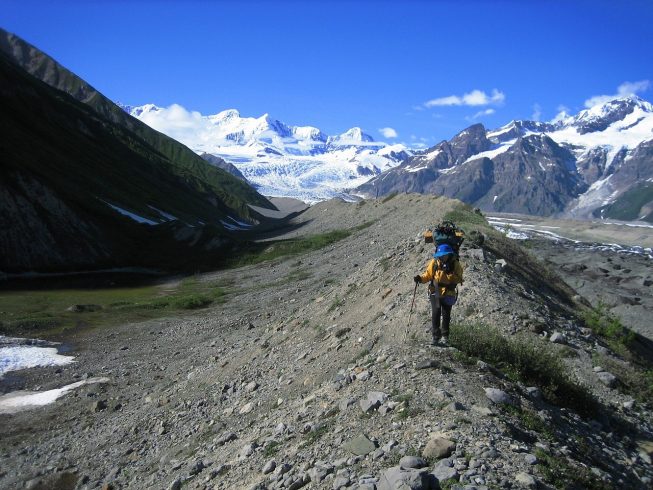 Don’t get us wrong: these parks are absolutely breathtaking, worth the trip every time, and if you head out into the backcountry, you can probably find some peace and quiet. But if you’re looking for some real solitude, the kind that you can only get when you haven’t seen another person for the last two days, you may want to start looking elsewhere.

The problem is that once you call a place wilderness and share it online (ahem), everybody wants to go there. Thankfully, the US is a very large country, and there’s no lack of places off the beaten path to spend a few days hiking, camping and shooting the breeze. While we can’t guarantee you’ll never run into anybody there (it’s public land, after all) you’ll definitely be away from the crowds and tourist traps. We’ve gone ahead and found some of the best, some from personal experience and others from the advice of friends and fellow adventurers. Here’s our 10 Best Camping Spots Without All the Crowds. Just don’t tell anybody, okay?

While it might be unfair to say that nobody goes to Carson National Forest, you aren’t likely to find the massive crowds that you will at the Grand Canyon, or in the Rockies to the North. Carson National Forest is located in the Northernmost part of New Mexico, contains over 1.5 million acres and the Sangre De Cristo Mountain Range, which gets up to 13,00 feet on Wheeler Peak. In other words, it’s not your typical New Mexico terrain; green, wooded, perhaps even a little lush, as opposed to the arid desert that occupies much of the state.

Best part: it’s a National Forest, which means way less rules and regulations than in a National or State Park. There are 35 established campsites you can choose from, and you can camp in the backcountry anywhere you like. The hike up to Wheeler Peak is 16 miles roundtrip, and there is endless opportunities for hiking, snowshoeing, even skiing in the winter. It’s open year-round, and completely free.

Capitol Reef National Park doesn’t get much attention, thanks to its proximity to Zion, Canyonlands and Arches, which always seem to get all the crowds. All the better for us, then. Located in South Central Utah, Capitol Reef contains the Waterpocket Fold, a 100-mile long geological fold that looks something like a canyon and a dried-out riverbed.

As a National Park, it has some rules, but also has several established campsites, a few remote ones, and allows backcountry camping, with permits and regulations. But there’s endless hiking and opportunities to see some of the most gorgeous red rocks and desert in the country, without all the hustle and bustle and tourists of nearby parks. You’ll have to pay to get in, but backcountry camping is free with a permit.

We’ve already written about Voyageurs National Park, as it is one of those national parks you’ve probably never heard of, and one of the few where you will find real solitude. There are 218,000 acres, mostly of islands and peninsulas of land surrounded by water. A lot of water. Rainy Lake has over 900 miles of shoreline within the parks boundaries. Perfect stomping grounds for canoeing, kayaking, hiking, snowshoeing in the winter. And there are over 220 campsites, all of which are free, and most of which can only be accessed from the water. You’re bound to find a place to yourself here, especially come winter time. Entrance is free. 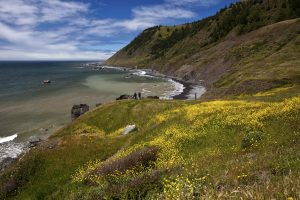 California really does have endless outdoor opportunities. And while most of the state seems overcrowded and hard to get away from, there are still places that are virtually untouched. Several hours north of San Francisco, the Pacific Coast is about as rugged and isolated as it gets, and is often given the name, the Lost Coast. Because it seems nobody ever goes there.

The Lost Coast Recreational Trail runs along the coastline of the King Range for about 25 miles, and while flat and easy in some sections, is extremely challenging and rugged in others, making for an adventurous backpacking trip. Camping can be found at the mouth of the Mattole River, near Petrolia and close to the Punta Gorda Lighthouse. During the winter, Northern California’s coast can be extremely wet and cold. And during the summer, it can be still be cold, damp and foggy, but that can sometimes give way to some of the most pristine blue skies and sunshine. A truly gorgeous hike away from the California crowds.

The Everglades are very different from most of our other hiking spots, mainly in that they are flat. Very flat, and wet. But that doesn’t mean they aren’t a mesmerizing backcountry experience in and of themselves. If you’re into kayaking or canoeing, you can paddle out 11 miles from the Flamingo Marina, and snag an isolated campsite on the southwest shore – this is actually the southernmost tip of the mainland US and Florida (as Key West is, you know, an island).

You’ll get unimpeded views of the ocean, with coastal grasses, palms and mangroves, as well as some exotic wildlife – the Diamondback Terrapin and gopher tortoise. Maybe even dolphins. And snakes and alligators. Watch out for those. This is one of the few uninhabited, isolated places left in Florida, and absolutely worth the trip.

You wanted some solitude, and you got it. There’s a reason they call Alaska the Last Frontier – it’s still wilderness, rugged and undeveloped, and that includes the National Parks. Wrangell-St. Elias is located 4 hours east of Anchorage and close to the Canadian Border, and while you get there by car, some of the best spots in the park are accessible only by bush planes. There are very few actual trails in the park, just wide-open wilderness, but one trip option includes Dixie Pass, which is only about 16 miles roundtrip but will take 3 days due to the sheer rugged inaccessibility of the terrain. And you know, you want to enjoy it. You can camp pretty much anywhere with a backcountry permit, and isolation is pretty much guaranteed, so be sure to be fluent in backcountry skills, navigation, and self-rescue. Actually, if you’re not from the area, you’re probably better off hiring a guide, as they suggest on the NPS website. But if you want to see true wilderness, this is it.

While most crowds head for Glacier National Park and Yellowstone, you should head to the Absaroka-Beartooth Wilderness if you want pure, unadulterated backcountry. This 944,000 acre expanse of land actually borders Yellowstone, and expands into Wyoming, covering part of Gallatin, Custer and Shoshone National Forests, and two mountain ranges – the Beartooth and Absaroka, hence the name. These two mountain ranges differ in geologic makeup – one of volcanic rock, the other of granite – but together they offer some serious wilderness. The Absarokas are greener, with more trees, while the Beartooths higher and more alpine. No vehicles of any kind – not even bikes – are allowed, and you are confined to wherever your feet can take you. You’ll need a permit for hiking, camping and fishing, but they are free and easy to get.

For a scenic camping site, head off the trail to Cloverleaf Lake, or Mystic Lake, two high elevation lakes (12-13,000 feet) that offer beautiful alpine blue waters and flat land for camping. Granite Peak, the highest peak in Montana, is located in the Beartooths, and offers stunning views of both the mountain ranges. Due to the wilderness’ rugged terrain, you won’t find the crowds here, just other pursuers of alpine adventures.

The arid landscape of Eastern Oregon stands in stark contrast to the lush greenery east of the Cascades. Hells Canyon National Recreation Area, located in the Wallowa Whitman National Forest, close to the Idaho border, overlooks Hells Canyon, a 10-mile long canyon carved by the Snake River, that is actually deeper than the Grand Canyon, plunging to depths of 7,993 feet. P.O. Saddle is a secluded campsite located above the Canyon, providing you expansive views of pristine wilderness. There are 14 campsites, which can be accessed by 4-wheel drive, and endless hiking nearby. You can also camp in the backcountry, as it is a National Forest, which may be your choice you’re still looking for solitude.

The largest wilderness area in Tennessee is Citico Creek, located in the Cherokee National Forest and containing over 16,000 acres of wilderness and connects with Slickrock Wilderness in North Carolina. While some corners of it are popular, there are also some untouched portions that you can have allto yourself for a camping trip.  Try Grassy Branch Trail, which crisscrosses Citico Creek numerous times, and eventually links up to other trails that will meander through old growth forests and prime, secluded camping spots.

The 100-Mile Wilderness, located in the North Woods, gets its name for the roughly 100-mile stretch of the Appalachian Trail that runs through it. It’s the last real wild stretch of the trail before it reaches Mt. Katahdin, the final crucible for thru-hikers completing their months-long journeys. There’s very little out here in the way of people, infrastructure, or anything really, and it can be considered some serious backcountry wilderness. You can hike the Appalachian Trail itself, camping anywhere along it, or try exploring many of the other trails, lodges and camping options out there. It’s crossed by lots of old logging roads and maintained by Appalachian Trail Club. So while you may run into other hikers, especially some thru-hikers, it’s one of the best ways to get (metaphorically) lost in the wilderness for a few days (or a week) at a time, setting up camp in complete communion with nature.

As much as we love a simple, straight-up beer, every once in a while, there is room for something a little different. We've tried out fair share of citrus-flavored beers, even a few berry ones. But Cucumber and Lime? That's usually reserved for gin and tonic.

Just for Fun: Make Stuffed Waffles with the Wonderffle

What’s the difference between stuffed waffles and regular waffles with all your favorite toppings inside? Maybe nothing serious, but properly-done stuffed waffles can have a lot more filling and come out more evenly-cooked;

Something about Goose Island just speaks Fall to us. There's nothing quite like sipping on one or two of their classic IPA on a brisk Autumn afternoon, while catching a glimpse of the game.Which is why we're pretty excited to try out some of the new beers they are releasing this fall, like the expanded Bourbon County Stout line

We all love a nice portable speaker that can blare out some nice tunes with excellent sound quality, virtually wherever we are. But the majority of portable speakers out there (and trust us, there are quite a few…) aren’t exactly the most stylish pieces of gear.