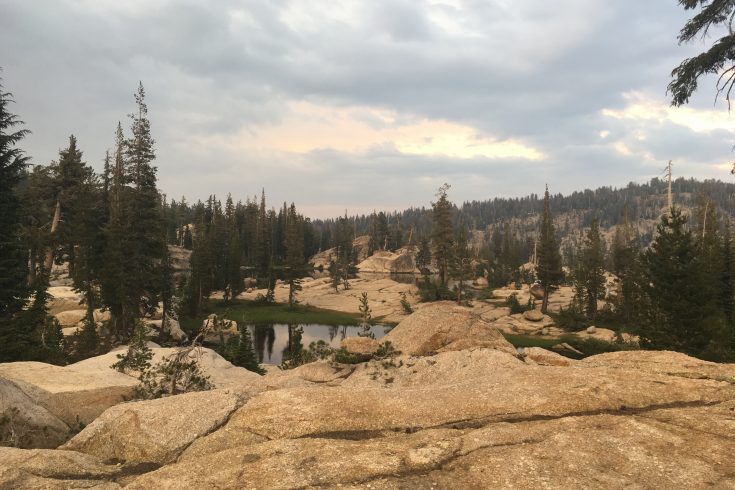 Located adjacent to Yosemite National Park, to the northeast and south and of Lake Tahoe, is Stanislaus National Forest. Covering over 1400 square miles and 898,000 acres of land, Stanislaus National Forest, designated in 1897, (it’s one of the oldest national forests in the country) has over 1100 miles of trails and over 2589 miles of roads, and is a prime location for outdoor recreation and enthusiasts year-round.

Located adjacent to Yosemite National Park, to the northeast and south and of Lake Tahoe, is Stanislaus National Forest. Covering over 1400 square miles and 898,000 acres of land, Stanislaus National Forest, designated in 1897, (it’s one of the oldest national forests in the country) has over 1100 miles of trails and over 2589 miles of roads, and is a prime location for outdoor recreation and enthusiasts year-round.

Of the several wilderness areas located in Stanislaus National Forest, the most popular is the Emigrant Wilderness, consisting of 113,000 acres and named after the Emigrant Gap, where many of the first American settlers in California passed over the Sierra Nevada. The Emigrant Wilderness contains some of the most pristine land in the Sierras, with hundreds of volcanic peaks and ridges, and enough lakes, rivers and streams to satisfy even the hottest, most sun-parched of Sierra hikers in the summer.

A few weekends back, we headed up to the Emigrant Wilderness, right near Pinecrest, CA, and tackled one of our favorite backpacking trips in the Sierra Mountains – Chewing Gum Lake.

Chewing Gum Lake is a relatively small alpine lake, surrounded by lush green meadows, about 10 miles from Highway 108. It’s a busy hike in the summertime – especially on a weekend – but is usually overlooked in favor of some larger and more popular lakes nearby, especially Bear Lake and Powell Lake. Still, it’s a beautiful, relaxing destination perfect for spending a summer night or two in the Sierra Mountains.

Chewing Gum Lake can be hiked in a few ways – as part of an overnight backpacking trip that hits several lakes nearby, or as just as an out-and-back from the Gianelli Trailhead – located 8 miles on rough, dirt road from Highway 108. You can try tackling this dirt road in a sedan – and we saw many do it – but don’t ask us how. The road is 2-3 miles of ditches, potholes, rocks and ridges, and we were more than glad that we drove a Highlander to the trailhead. It must have cut down on driving time by half over being in the VW.

When you reach the trailhead, you’ll find several small parking lots, which will likely be full on a weekend in the summer but have more than ample parking other times of year, or even during the week. We spend a few minutes prepping our gear and packing up for the hike and took of for Chewing Gum Lake at about 5PM on a July Friday evening.

On The Way: The Hike Itself

The trail to Chewing Gum is well-marked the entire way, and you’d be unlikely to get lost or have any trouble with it. It’s well-trodden but in good shape, and almost never crowded. On our way out, we saw only one other group of three hikers until we reached the lake.

It’s approximately 4.5 miles each way from Gianelli to the lake. The first 1.8 miles or so are uphill, with a total elevation gain between 1500 and 2000 feet, depending on who you ask. It’s not particularly steep or rugged but is constant and tiring with a loaded pack on your back. Along the way, you’ll be treated to some enchanting views; at the top of the climb you’ll see Castle Rock and the Three Chimneys in the distance to your left.

Due to the Ferguson Fire, about 30 miles to our south, the air was smoky and hazy – despite being a clear sunny day. The smoke was mostly gone by the time we arrived, but a few backpackers to whom we gave a lift said that it had been much thicker in the week preceding, and had even hampered their hiking efforts a bit.

After about 1.8 miles, the trail will level off and become more of a slight up-and-down for the next mile or two. You’ll walk through a lot of rocky outcroppings, as well as towering pines and redwoods (as customary for the Sierra Nevada) for another mile plus, passing Powell Lake to your left, before reaching the highest point of the trek.

At about mile 3.3 and about 9,000 feet in elevation, you’ll find yourself standing on massive granite slabs and overlooking a valley filled with alpine meadows, creeks and Chewing Gum Lake itself. It’s quite a sight to behold; green surrounded by sheer granite walls and pines on four sides. Not quite Yosemite Valley, sure but enough to pause and enjoy for a bit, before continuing your way down to the lake. It took us about two hours to get here, and the sun was beginning to get low in the sky, making for a pleasant, peaceful view. We had still over an hour till sunset, thankfully, and plenty of time to cover the last mile-plus to camp for the night.

From the overlook, you’ll make rapid descent a few hundred feet down to about 8600 feet, where you’ll find yourself in those green alpine meadows. In July, they were still full of beautiful wildflowers that made for a beautiful sight – and tons of mosquitoes.

While most higher, drier hikes in the Sierra are mosquito-free, Chewing Gum Lake – and the other lakes in the area – have more than their fair share of the unwanted visitors. We received more than our fair share of bites until we fished out the bug spray (for some reason, we couldn’t find the DEET, which had fallen to the bottom of the bag, and had to settle for the natural stuff). Upon reaching the lake (another half mile through the meadows) we even threw on our midlayers just to keep the bugs off.

Upon reaching the lake, there were several campsites to choose from. As might be expected on a Summer weekend, there were several other groups camping out the night at the lake, but there were still several campsites to choose from – and it didn’t feel crowded at all. We were able to find an excellent campsite on a rock overlooking the lake, with a fire ring and all, far enough away from everyone else to have some peace, quiet and privacy, and began to set up camp.

After starting a fire (fires are allowed in the Emigrant Wilderness below 9,000 feet, much to our surprise) we cooked up some dinner – tuna and bean chili. Unusual, yes, but delicious. As the sun set, we kicked back on the rocks, enjoyed the fire and good conversation. The sky was clear; Mars and Venus were particularly bright, even with the smoky haze. And the weather remained perfect; even after the sun went down, the temperatures didn’t. We didn’t need a jacket around the fire, and barely needed our sleeping bags that night.

The Next Morning and The Way Back

After a night of fitful sleep (we blame the 8600’ elevation, not having had a prior night to adj

ust from sea level) we awoke minutes before sunrise. It was apparent from the second we stirred it was going to be another clear day, and this time, the smoke and haze had lifted. After checking the bear canister and being just a little offended that no animals tried to steal our delicious eats, we relit the fire from the night before (it took some blowing and coddling, as we had run out of paper and the dew had left our kindling wet). We then prepared some cowboy coffee and a breakfast of sausage and beans, which we enjoyed around the fire as the sun arose. The mosquitoes were also yet to attack us. We took our time to eat, clean and pack up camp – we were in no rush – before heading off back the way we came.

The trip back was uneventful, but enjoyable, as the sky was clear and the sun high and bright – no smoke in sight. We would have loved to continue on to the next lake and made a two-nighter, but due to schedule constraints, this was the best we could do for now. Before descending back to the trailhead, we stopped to enjoy the expansive vista of the Three Chimneys and the valley below – a sight that reminded us of Yosemite, but without the crowds.

All in all, another successful trip the mountains. We highly recommend Chewing Gum Lake as an excellent beginners’ backpacking trip, and look forward to coming back and creating a multi-day trip out of the Emigrant Wilderness. 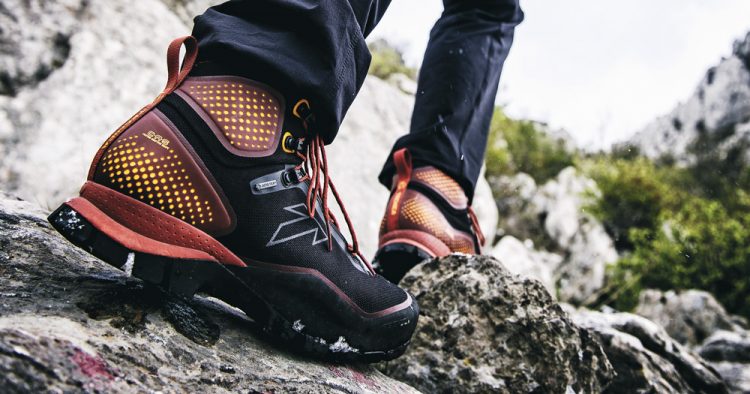 Tecnica Forge Boots Mold To Your Feet For A Perfect Fit

Finding comfortable footwear can be a challenge, especially for those of us with in-between sizes or widths. When it comes to hiking and outdoor shoes, that challenge can be even more so, which is why the Tecnica Forge line of boots is so great; thermo-formable footwear has been around for a while (especially in ski boots), but no one has really ventured into the world of lighweight hiking boots with them just yet.

The Massdrop Cache Is The EDC Tray We All Need

Valet trays are essential pieces for any home or apartment interior, creating a convenient and classy spot to neatly throw and stash their equipment at the end of the day. But what about the truly tool-obsessed, the EDC Gear lovers among us, who have more knives, watches and pocket-sized tools than your average fellow, and wants to display them all – neatly and gracefully

The Ultimate Running Shoe: HOKA One One Men’s Speedgoat 4

Have you ever thought to yourself, man, I could really use a titanium thermos? If so, you're in luck. The Ti22 Therma is the piece of kit you need. This vacuum sealed thermos and water bottle is made of pure, surgical grade titanium, making it much lighter and much more durable than your regular stainless steel water bottle.

Mountain Hub Brings The Outdoors To Your Smartphone

As un-intuitive as it might seem, technology and the Internet can be very useful tools in the outdoors - provided you can get some signal, or even better, don't actually need one.  And apart from some of the more common apps we already have in our arsenal, like Alltrails and Peakfinder, one of the coolest new apps out there is Mountain Hub.